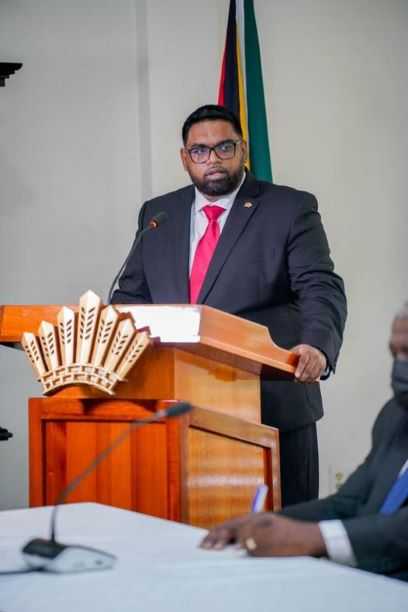 President Irfaan Ali announced on Saturday that some 3,800 COVID-19 vaccines will be available to Guyanese by February and March and will be immediately allocated to frontline health workers, people with comorbidities and the elderly, a release from the Office of the President said.

The president during an address to the nation said that his government has been working behind the scenes to pursue all possible means to bring the virus under control.

The president said that last year, Guyana joined COVAX and is now eligible to receive vaccines for twenty per cent of the population, which will be free of cost. Those are the vaccines expected from next month.

Ali however stated that the government will be looking at different avenues to get a larger percentage of the population protected and will be aggressively going after vaccines.

He said that at the bilateral level, the government of Guyana has had productive discussions with the governments of India, China and Russia, while they are also working with CARICOM, the Organization of Islamic Cooperation and the European Union for a quota of vaccines.

“The government of China has confirmed that it will be donating 20,000 doses of vaccines to Guyana. Discussions are ongoing and arrangements to acquire vaccines from these countries will be finalized shortly,” the release said.

The president stated that the Government is also negotiating with major manufacturers, including Pfizer, BioNTec, Moderna and AstraZeneca and is hoping to finalize a supply of vaccines from them.

“In short, your government is wholly committed to obtaining vaccines in the shortest possible time, utilizing every means at our disposal for our people. We will spare no efforts; we are pursuing all avenues to get as many vaccines as possible to cover as much of the population as possible.”