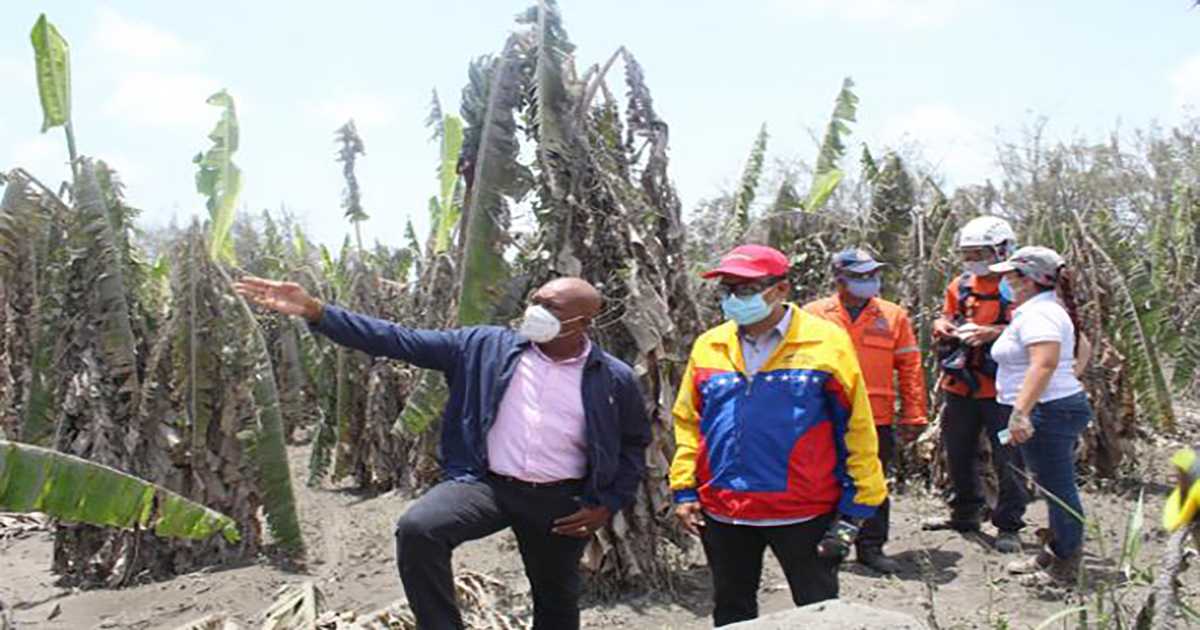 Barbados Advocate – The violent eruption of La Soufrière has left a shocking scene of dead livestock, ash-covered crops, and damaged roads and structures in the north of the island.

This week, the officials of the Ministry of Agriculture, Forestry, Fisheries, Rural Transformation, Industry and Labour conducted a visual assessment and tour of the volcano’s devastation with the media and stakeholders.

St. Vincent and the Grenadines’ (SVG) Minister of Agriculture, Saboto Caesar, travelled to the windward side of the island and saw first-hand the destruction caused by recent volcanic activity. His team captured images of collapsed storage tanks and roofs, streets filled with several inches of ash and large boulders, dead chicken and sheep, and banana, eggplant and pineapple crops damaged by volcanic ash.

The Barbados Advocate contacted this ministry on Wednesday and was informed that a concise assessment and report has not been arranged as yet as they continue to collect data. Officials explained that this occurred as the volcano is still active and erupting.

“It is all a part of food security and we are really encouraging other farmers to participate in this programme. We started yesterday, the care packages programme and this is where farmers will bring their produce. The government will purchase these produce, place them in boxes, distribute to the different shelters and also to different communities where persons are in need,” said Caesar.

He noted that SVG has significant production ongoing and the farmers are ready to get their feed from the feed support programme. Caesar expressed his appreciation to the farmers who are contributing to the relief efforts.

In the Caribbean, St. Vincent and the Grenadines is one of the main suppliers of root crops and also supplies sister island, Grenada, with mutton, beef and pork. St. Lucia, Trinidad and Barbados are expected to be impacted by the crippled St. Vincent agricultural sector.

Despite the destruction caused by La Soufrière to the agricultural sector, the island still exported root crops to Trinidad and Tobago this week. Trinidad and Tobago media reported that Admiral Bay I, one of three vessels, transported produce to the twin-island. The crops included dasheen, eddoes, ginger, soursop, green fig, coconuts and mangoes. These root crops are grown in the yellow zone of St. Vincent.