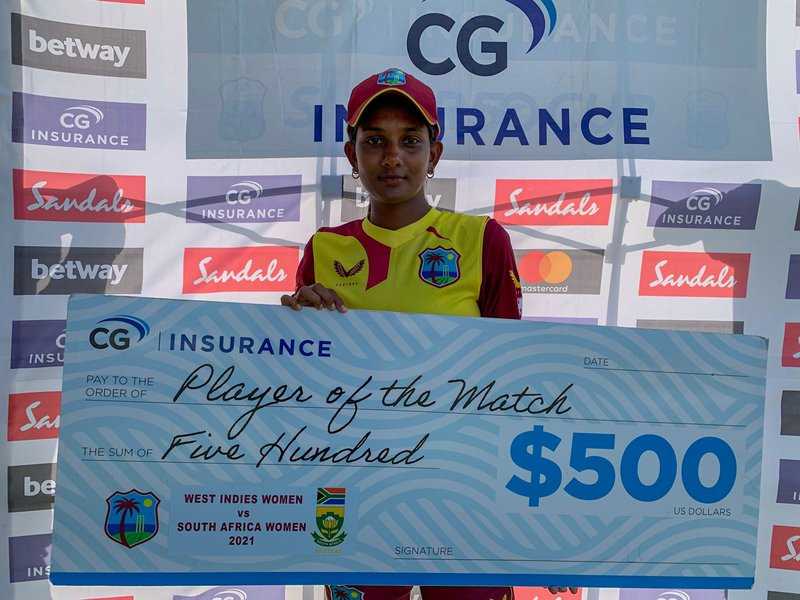 The 26-year-old off-spinner came into the attack in the 15th over in her first match of the series. She took a wicket with her third ball and returned the superb figures of 3-0-8-3 to receive the CG Insurance Player-of-the-Match award.

Ramharack was well assisted by some excellent fielding when Chadean Nation ran around to her right at long-on, dived full length and held onto a catch to dismiss Chole Tyron. Two overs later, Kyshona Knight snapped up a sharp chance to remove Trisha Chetty, and Ramharack got her third when she clean-bowled Ayabonga Khaka in the 19th over.

Earlier in the innings, Britney Cooper again demonstrated her immense skills in the outfield with a stunning running and diving catch at mid-on to pick up the key wicket Lizelle Lee for nine off Aliyah Alleyne, who ended with 2-16. It proved to be a very important wicket moment in the match as Lee fell in single digit for the first time in the series. In the previous knocks, Lee made a run-a-ball 30 and 75 off 52 balls to be named CG Insurance Player-of-the-Series.

In reply, West Indies easily reached the target, closing out the match at 81-5 off 11.5 overs to win with 49 balls to spare. Deandra Dottin again led the charge with a purposeful knock of 31off 21 balls. She hit three fours through the on-side and a massive straight six off a flighted delivery from left-arm spinner Nonkululeko Mlaba.

Left-hander Kycia Knight also played well – with 26 off 27 balls – which included four flowing boundaries, as she added 53 for the second wicket with Dottin.

The two teams will now switch to the CG Insurance One-Day International Series. The opening match will be at the Coolidge Cricket Ground on Tuesday. First ball in the day/night match is 2:45pm (1:45pm Jamaica Time).