(The writer is Antigua and Barbuda’s Ambassador to the United States and the Organization of American States.   He is also a Senior Fellow at the Institute of Commonwealth Studies at the University of London and Massey College in the University of Toronto.  The views expressed are entirely his own)

It was an odd law into which to place it, but new and welcome directives on ‘de-risking’, which has plagued Caribbean countries, has become law in the United States.

The law in which the helpful directives are embedded is the ‘‘William M. (Mac) Thornberry National Defense Authorization Act for Fiscal Year 2021’’ (NDAA).  It was vetoed by former President Donald Trump and it should, at that point, have died. But for the first time in Trump’s presidency, the Congress mustered the two-thirds majority needed to overturn his veto.

Trump’s veto had nothing to do with ‘de-risking’.  It was directed mainly at the bill’s removal of the names from military facilities of Confederate officers.  A significant number of Trump’s supporters come from the former confederate states.

Section 6215 of the NDAA, which deals with Financial Services De-Risking, is the result of painstaking work by the Prime Minister of Antigua and Barbuda, Gaston Browne, and his instructions to me, as Ambassador of Antigua and Barbuda to the United States, to leave no stone unturned in engaging the U.S. Congress and particularly the House Banking Committee, to draw attention to the harmful – if unintended – consequences of de-risking for the Caribbean’s banking system.  Browne is the lead CARICOM head of government for financial services.

The Chairperson of the Committee is the formidable Maxine Waters, representative in the House for California’s 43rd district.  Throughout the latter half of 2019, she was bombarded by approaches from Antigua and Barbuda in written and personal presentations, explaining why de-risking by U.S. global banks was depriving Caribbean banks of crucial correspondent banking relations, and threatening to cut-off the region from participation in the global trading and financial system. 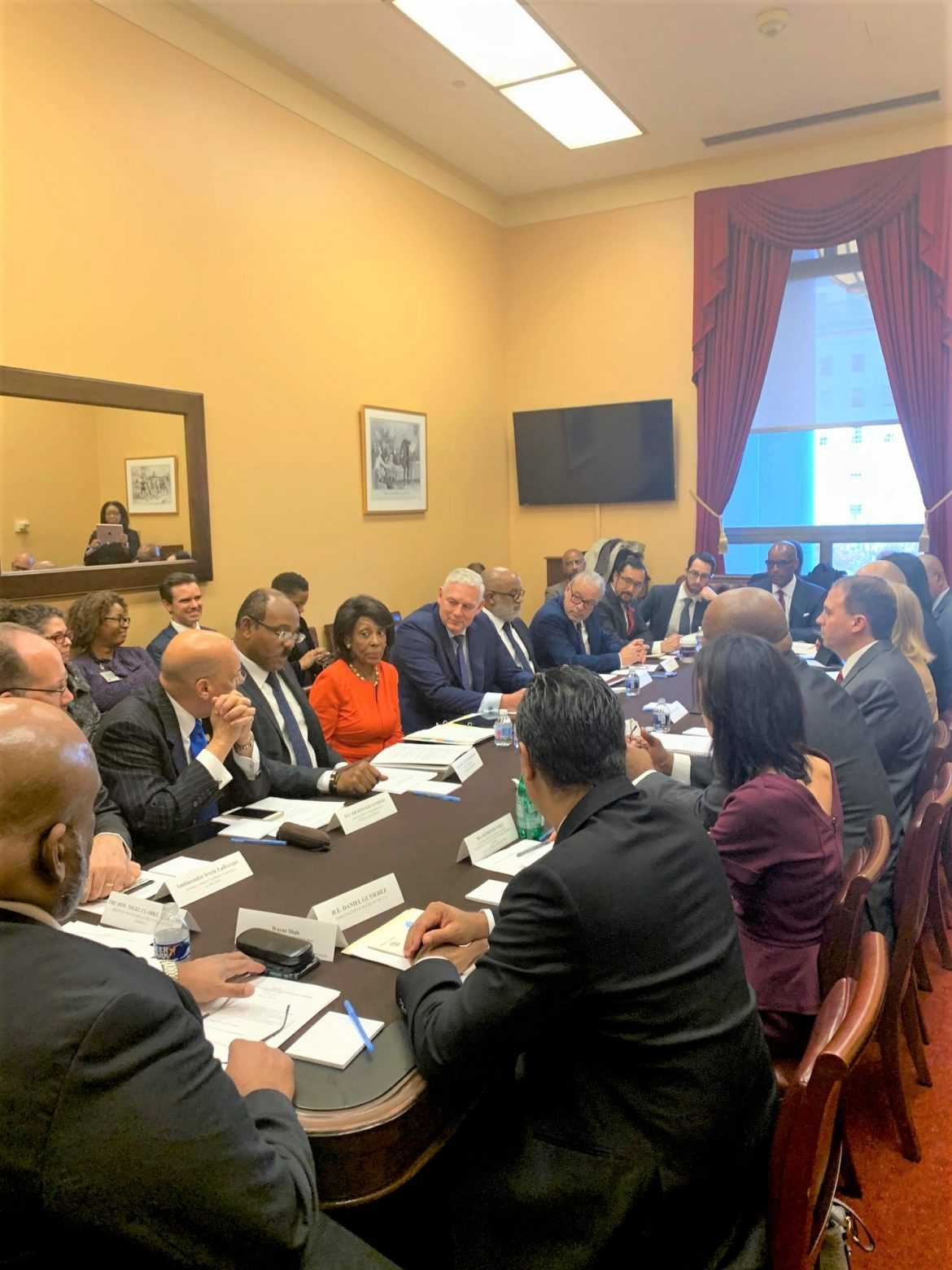 Meeting between CARICOM and US Financial Services Committee

In early 2019, banks in some CARICOM countries had lost all their correspondent banks, and institutions in other states were tenuously holding on to only one.  All this had arisen because of U.S. regulatory directives to its banks concerning money laundering, financing of terrorism and the mythical but popular view that Caribbean countries were ‘tax -havens’ and their banks were awash with dirty money.

The facts told a different story.  In the 10 years up to 2019, US$26 billion has been imposed worldwide as fines for non-compliance with money laundering, but not one bank was located in the Caribbean.

Changing this image of the Caribbean, laying out the evidence, and making solid arguments were all necessary, particularly for a U.S. Congress confronted with a multitude of domestic and global issues on an hourly basis.  In Maxine Waters, the Caribbean region found a tough but decisive person, sceptical but willing to listen and to examine the evidence.

The Caribbean effort that was spearheaded in Washington by Antigua and Barbuda strongly supported by Belize and St Lucia, culminated in a Congressional Round Table in November 2019, chaired by Waters and attended by Gaston Browne, St Lucia Prime Minister Allen Chastenet, and Ministers from Trinidad and Tobago, Barbados, and Jamaica. Waters had invited to the meeting senior representatives of major U.S. banks as well as other members of the House Finance Committee.  A full and frank discussion ensued.

At the end of it, Waters and her Congressional colleagues promised action.  Deal making in the U.S. Congress is more art than science.  It results in matters inserted in a law where it may seem to have no relevance.  But that is the trade for support that occurs. In the result, the promised action was delivered in the NDAA.

Among the matters that the law stipulates as guidelines are: providing vital humanitarian and development assistance and     protecting the integrity of the international financial system are complementary goals; access issues are a concern for other underserved individuals and entities such as those sending remittances from the United States to their families overseas and certain domestic and overseas jurisdictions that have experienced curtailed access to cross-border financial services due, in part, to de-risking; the financial exclusion caused by de-risking can ultimately drive money into less transparent, shadow channels through the carrying of cash or use of unlicensed or unregistered money service remitters, thus reducing transparency and traceability, which are  critical for financial integrity, and can increase the risk of    money falling into the wrong hands; and anti-money laundering, countering the financing of terrorism, and sanctions policies must ensure that the policies do not unduly hinder or delay legitimate access to the international financial system for underserved individuals, entities, and     geographic area.

Those were the very points which were put forward by the representatives of small Caribbean states who can be pleased that one of the law’s fundamental directives is that “policies that encourage financial inclusion must remain a priority”.

The NDAA is a small but significant step by the U.S. Congress and especially by the House Banking Committee, led by Congresswoman Maxine Waters.  It was a big leap for small Caribbean countries and a triumph for their diligence and diplomacy.

Much work remains to be done but an important pathway to rectifying and balancing de-risking has been opened. Amid the ravages of COVID-19, it is welcome good news.