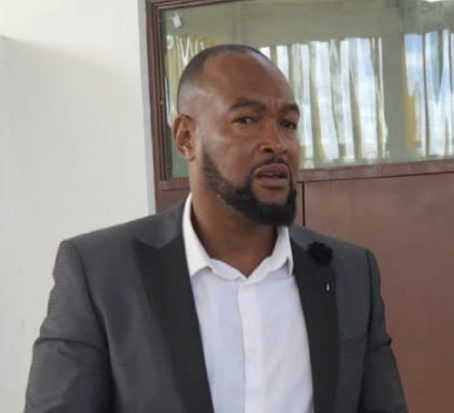 The driver at the centre of last Sunday’s catastrophic hit and run accident that left two young medical students severely injured, Karim Edwards, has been bailed.

The middle aged accountant, who has only been charged with dangerous driving, was granted bail by Magistrate Dexter Wason last Friday in the amount of  $20,000.00 with a cash component of $5000.00 and two sureties.

The husband of a senior judicial officer is also required to report to the Langford’s Police Station thrice weekly on Monday, Wednesday and Saturday.

As a condition of his bail he was also required to surrender his passport.

His drivers licence has also been revoked by the Commissioner of Police.

The female victim, Priyanjana Das, 19, lost her right arm and sustained several broken bones as a result of the accident.

Kenneth Matthew, 21, who was mown down and left on the side of Friars Hill Road following the accident, sustained several broken bones and, according to reports, has not regained consciousness since the accident occured.

Both victims’ families are now in the country and arrangements are being made to have them flown out to receive medical treatment abroad.

Matthew, according to reports, is unlikely to be moved anytime soon as his condition remains too unstable for medical transport.

Both were leaving an American University of Antigua event hosted at Stratos Bar and Lounge when they were struck by Edwards’ car as he travelled north on Friars Hill Road.

Edwards did not stop after hitting Das and Matthew, however he returned to the scene sometime later in the company of an attorney.

He is represented by Wendel Robinson who will accompany him to court when he next appears on 12th January, 2023.

Last week, there was great public outrage over the fact that police took several days to finally charge the driver.

The outcry rose to crescendo, however, when the lone charge of dangerous driving was levelled against Edwards.

Many now argue that given the severity of the injuries suffered by several victims of people who have later been charged with dangerous driving, the criminal penalties associated do not serve as adequate deterrents.

The Vehicles and Road Traffic Act CAP. 460, Section 55 says that a person convicted of the offence of Dangerous Driving shall be liable:

(b) on conviction on indictment to imprisonment with or without hard labour for a term not exceeding two years, or to a fine, or both such imprisonment and fine.

Andre, meanwhile, is still unable to walk or speak and has developed severe pressure ulcers because of his immobility.

He remains in Texas, where he is receiving treatment for the brain injury he sustained in the accident.