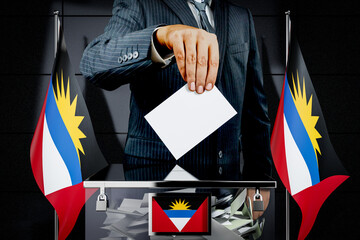 With general elections due by the end of the first quarter of 2023, the latest opinion poll conducted by Caribbean Development Research Services Inc. (CADRES), a company operated by political scientist Peter Wickham, has determined that the Antigua and Barbuda Labour Party (ABLP) would win general elections if they were called at the time the last poll was conducted.

In a press statement, CADRES said that it had been authorised its client, the ABLP, to make some details of the information gathered public.

The polls, which were conducted twice over a seven month period, did not include constituencies in which the ABLP returned strong performances in the 2018 elections.

Polling included sampling the opinion of voters in the St. Peter constituency and the results indicated that the incumbent, Asot Michael, who plans to contest the coming elections as an independent candidate, will lose.

According to the poll, Michael is expected to emerge in third place behind, the ABLP’s Rawdon Turner and the United Progressive Party’s Tevaughn Harriette.

Commenting on the latest poll results, and particularly the findings from St. Peter, Prime Minister Gaston Browne said the poll has served to confirm that the ABLP’s Turner will enjoy victory.

He also dismissed claims that a poll commissioned by Michael using the services of Jamaican pollster, Don Anderson, put the incumbent MP ahead in St. Peter.

“I challenge Asot Michael to ask Don Anderson to make public those results. He could do so via a press release if he doesn’t want to go on a radio station. It is not true!” Browne stated emphatically.

The prime minister says Michael will likely repeat the mistakes made by the late Donald Halstead in his quest for election in St. John’s City West in 1999.

Browne said Halstead spent considerable resources in his bid to become elected, even chartering a flight to bring electors home to vote.

In the end, Halstead was unsuccessful and many of the voters he flew in to vote for him gave their support to the UPP’s Colin Derrick or to the present MP, Gaston Browne.

Regarding the St. Peter constituency, CADRES considered comparative regional cases in which independent candidates contested an election. It was noted that an independent would need to gain the support of at least 20 percent of voters to be viable and Michael did not attain that threshold.

“The first round of polling was conducted during April/May of 2022 and our assessment was that the ABLP would have prevailed if an election were called at the time of polling.

“Notwithstanding, Antiguans were very anxious about the water situation and were equally concerned about the ability of the country to recover from the impact of COVID, especially in the economic and educational realms,” an excerpt of the CADRES report said.

The question of leadership preferences of the Antigua and Barbuda electorate were also raised.

“Leadership preferences were considered in each constituency; however, the options were restricted to the leaders of the three active political parties (ABLP, UPP and DNA) and PM Browne was preferred to the UPP’s leader, Harold Lovell and the DNA’s leader Joanne Massiah, in a majority of cases,” the CADRES said.

“The second round of polling was conducted during October and restricted to some of the same constituencies, along with two that were not polled in April/May.

“On this more recent occasion, the ABLP was either leading or competitive in all constituencies polled, suggesting that it would prevail as a government if an election were called at that time.

“Notwithstanding, Antiguans remain concerned about several issues, not least of which is the availability and cost of Water and Electricity, along with Employment and several infrastructural issues, including roads,” the report indicated.

The other significant finding related to the Democratic National Alliance (DNA), which did not appear viable in any of the constituencies surveyed. This was also the case in the April/May survey when the DNA had not yet finalised its slate of candidates.

CADRES is therefore of the opinion that the coming election will be a contest between the two traditional parties with the ABLP leading in a majority of the country’s seventeen constituencies at this time.