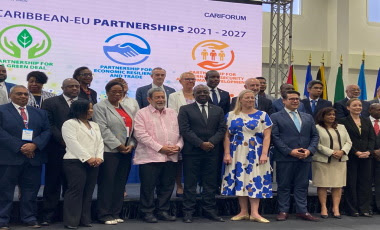 The European Union (EU) is providing more than Euro 800 million (One
Euro=US$1.29 cents) to the 16 member Caribbean Forum (CARIFORUM)
countries under a new partnership agreement.

A joint communique issued at the end of the European Union-CARIFORUM
Ministerial Meeting held in Barbados said that Europe would be providing the
funds until 2027.

It said that the EU and Caribbean countries will work together through three
partnerships under the Global Gateway, respectively focusing on “Green Deal”,
“Economic Resilience and Trade” as well as “Governance, Security and Human
Development”.

“As part of these partnerships, the ministers also agreed on concrete actions to
fight climate change, protect biodiversity, foster digital innovation and mobility of
students and university staff.”

“The three partnerships launched today (Wednesday) roll out the EU’s Global
Gateway strategy in the Caribbean. Global Gateway is our offer to partner
countries for sustainable and trusted connections. It will help to address the most
pressing global challenges, from fighting climate change, to improving health
systems, and boosting competitiveness and security of global supply chains,” said
Urpilainen

“As the Russia’s aggression of Ukraine and the COVID-pandemic have made these
challenges even more acute, we want to help our partners in addressing them and

tackle inequalities.  I am pleased to reaffirm our strong partnership with the
Caribbean with a solid contribution of over €800 million until 2027,” she added.

The communique said that the Caribbean and the EU leaders reiterated their
readiness to step up collaboration to push for a green, inclusive and digital
transition including at global level where both partners together can exercise
leadership in multilateral fora.

“The Caribbean leaders welcomed the extension of the EU Flagship programme on
Climate Change in Latin America, EUROCLIMA, to the Caribbean. The
programme will support Caribbean partners with Euro 35 million to achieve their
commitments under the Paris Agreement. “

Urpilainen also announced a number of new initiatives, such as five million Euro
to foster digital innovation in the Caribbean and its readiness to explore
possibilities for an extension of the BELLA optic cable to the region and to support
the convergence of the rules and standards in the whole Latin America and
Caribbean region.