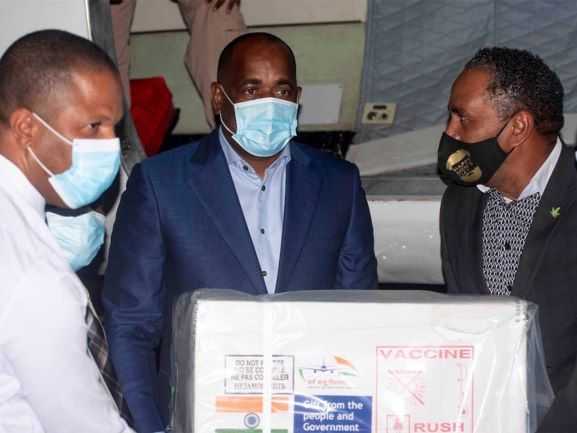 The donation of several batches of the Oxford-AstraZeneca vaccine by the government of India to Barbados and Dominica has been hailed as the start of the region’s fightback against the dreaded COVID-19 pandemic.

Dominica’s Prime Minister Roosevelt Skerrit emphasized that Tuesday night as he joined his Barbadian counterpart Mia Mottley via Zoom at a press conference that saw them expressing gratitude to the government and people of India for the first ever donation of the vaccine to the region. Both countries received shipments of the vaccines earlier that day.

Addressing nationals of both countries, Skerrit said: “Guided by the results of the latest studies, this vaccine will reduce the likelihood of transmission to others; this means that Dominica as a country will soon be empowered to achieve a crucial objective, which is to further minimize and eventually stamp out the impact of the various strains of COVID-19. The vaccine will not be mandatory, but I would encourage all citizens to consider the danger of passing up such an opportunity as this to safeguard the health of yourself and your loved ones.”

Skerrit said that being the leader of a small Caribbean island, with a population of just 72,000, he did not expect such a swift positive response to his request for the vaccines from India’s Prime Minister Narendra Modi.

Skerrit also recognized the part played by scientists and those responsible for the “tireless research and trials that went into manufacturing this formula for resistance.”

Also heaping praise on Prime Minister Mottley for ensuring Barbadians receive the vaccines, the Dominican leader noted the batches of the Oxford-AstraZeneca vaccine would be securely stored and, like Barbados, his country would soon be advancing its public awareness campaign and rolling out its vaccination exercise this month.

Stating that this would start on 22nd February, he outlined the first to receive vaccines would be frontline workers, senior citizens who are at risk ,and members of cabinet and parliament.