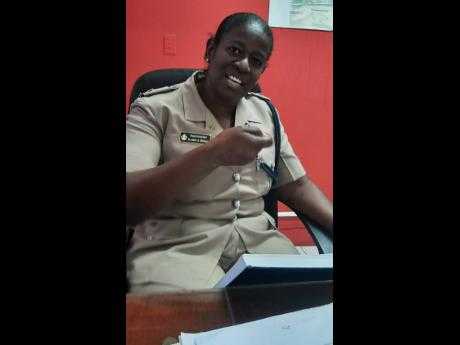 A nefarious letter demanding bounty or blood from construction site operators in St Thomas has been turned over to the Counter-Terrorism and Organized Crime Unit (C-TOC) for deeper analysis, but for many residents of the sleepy Trinityville community, the damage has already been done.

Trinityville is not the typical community for this type of crime. The area recorded one stabbing murder all of last year – that of a man whose attacker ran to the police station after committing the act.

Here, gun-toting and masked intimidation are as foreign as piped water, internet access and proper roads.

So when two gunmen held up an excavator driver two weeks ago and stuffed a page-long demand of $100,000 fortnightly – ‘coorporation or slataration’ – into his palm, it brought work to a grinding halt and disappointment, fear and anxiety settled over the community.

Trinityville, however, is one of few communities hit by a long-standing criminal strategy that has for years crippled development and cost massive loss of lives in some of Jamaica’s poorest communities.

From larger government and private projects such as Highway 2000, improvement on the Mandela Highway, Portia Simpson Miller Square, work on the Old Harbour bypass, and construction projects at The University of the West Indies, Gleaner stories over the last decade have chronicled the bloody trail left behind by criminals who prey on construction sites, bringing death to resistance.

Contractors at apartment complexes, The White Water Housing Project, and Unions Estate in St Catherine were also favoured targets over the years, and homeowners – like some in Portmore, St Catherine – are not spared by hoodlums making demands as they make additions to their dwellings.

Some projects, like cleaning work in the South and North Gully in Montego Bay, St James, come seasonally, and have attracted set perpetrators over the years. Gully clearing in sections of Bull Bay, Riverton and Seaview Gardens in the Corporate Area have also been targets, according to the contractors.