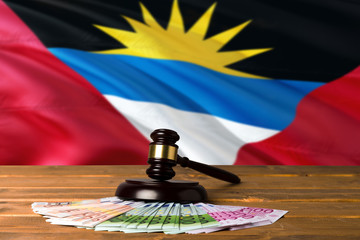 A High Court judge has ruled against the Barbuda Council dealing the body its latest legal loss in the last several months.

This time around, the Council sought to stop the proposed construction of two private homes at Cedar Tree Point, located in the Codrington Lagoon National Park – protected area – and Ramsar Site.

In its submissions to the court, the Council claimed that it had a responsibility to protect the lives and the livelihoods of residents of the sister island as most are seafarers.

After considering the evidence presented by the opposing attorneys, Justice Nicola Byers ruled that the case should be withdrawn.

The court further ordered that costs for the defendants – Henry Anderson, the proposed home owner ($5,000.00), and the Development Control Authority (DCA) $3,000.00) – be paid by the Council.

Justice Byers also took issue with several elements of the case presented by the Barbuda Council.

“What the judge found to be particularly astonishing was that the Barbuda Council sought to provide questionable statements in a legal submission known as ex parte, meaning that the application to the court is done behind the defendants back without giving them the opportunity to defend themselves.

“Fortunately, Justice Byers did not allow this action to proceed and invited Anderson and the DCA to court to defend themselves,” a spokesman for the DCA explained.

The Barbuda Council engaged the services of Dr. Adell Blair, who described herself as an advisor to the Council and expert in matters related to Barbuda’s unique circumstances.

According to the DCA spokesman, despite being aware that the evidence she presented related to an earlier application that had been withdrawn, Dr. Blair still submitted it to the court.

“The court found that she was aware that the application she was commenting on was withdrawn as she made reference to the final planning application in her writing but still continues to make comments based on a withdrawn application.

“Dr Blair submitted “facts” regarding the location of the property that were easily [disproved].

“One such “fact” was that the property showed no regard to the lawful setbacks from the ocean, or a setback from the bird sanctuary.

“This is entirely false. The property is set back 300 feet from both the permanent line of vegetation and 300 feet from the edge of the bird sanctuary.  In fact, it is in excess of 5,000 feet from the frigate bird nesting site,” the spokesman contended.

The Barbuda Council also told the court that the founder of PLH was building a home at the site.

According to the DCA source, this is entirely false as no such second property exists and no building permit or DCA approval was sought for such a property.

This, they said, is well known by the Barbuda Council as they were invited to comment on the final application that was submitted.

The spokesman explained that the DCA has the ultimate authority on planning applications and can invite the Department of Environment (DoE) to comment before making their decision.

In this instance, the DCA considered the DoE’s advice and went further, insisting on strict environmental measures and setbacks.

Building in a Ramsar site is common and a great deal of Barbuda’s land space falls within this specially designated zone.

These sites, located all over the planet are named for the location in Iran where the Ramsar Convention on Wetlands of International Importance Especially as Waterfowl Habitat was signed in 1971.

There are several properties within the zone that were approved under the previous United Progressive Party administration that were not subjected to the rigorous environmental controls imposed in this case.

Despite this, those earlier properties have not negatively affected Barbuda’s frigate bird population. Therefore, the DCA’s decision to approve the disputed construction is eminently sensible and was executed in accordance with the law.