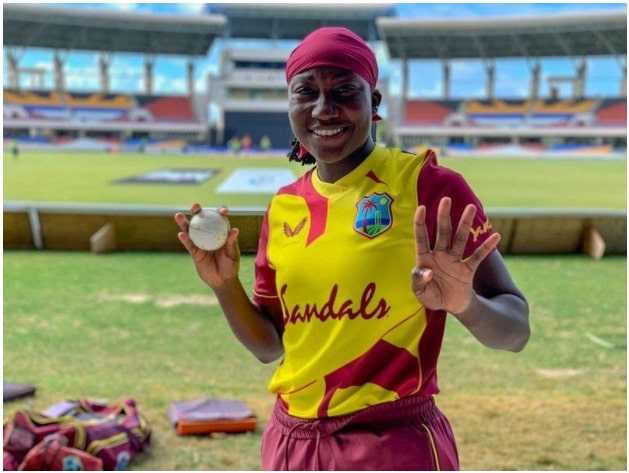 Stafanie Taylor gave one of the greatest performances in the history of women’s Twenty20 cricket as she piloted West Indies Women to a huge victory over Pakistan Women in the third CG Insurance T20I on Sunday.

The inspirational captain was sensational with the ball, taking a hat-trick in the final over to end with 4 for17 as Pakistan made 102. She then top-scored with 43 not out as the home team strolled to 106 for 4 off 19.1 overs to make it three wins in a row and a clean sweep of the series.

Taylor became the second West Indian woman to take a hat-trick at international level when she removed Fatima Sana, Diana Baig, and Anam Amin. The previous hat-trick for West Indies Women was by Anisa Mohammed against South Africa in 2018. Mohammed also bowled well to end with impressive figures of 3 for 24 off her four overs.

When the West Indies batted, Taylor added 41 for the fourth wicket with Chadean Nation (20) and then an unbroken fifth-wicket stand of 48 with left-hander Kycia Knight, who ended on 24 not out.

Speaking to CWI Media after the match, Taylor said: “I wasn’t thinking wicket (after second consecutive wicket) to be honest … We know runs were more on the forefront and trying to restrict them not getting to 115, because I knew that the wickets coming down would be kind of hard to bat on. (Going out to bat) I wouldn’t say panic but I knew that today was the day that I had to step up … I just thought that the wicket today was try to get yourself in and once you’re in, you know that you can go big and I think that was my plan …”

Coach Walsh told CWI Media, “The experience and exposure would have done them a world of good. It was good to get them … playing and I’m expecting a better performances in the 50-over series. It’s good to get the A-team girls playing and for women’s cricket it’s tremendous … So getting a chance now and to expose so many girls is fantastic for us because we can see what they’re like in competition.”