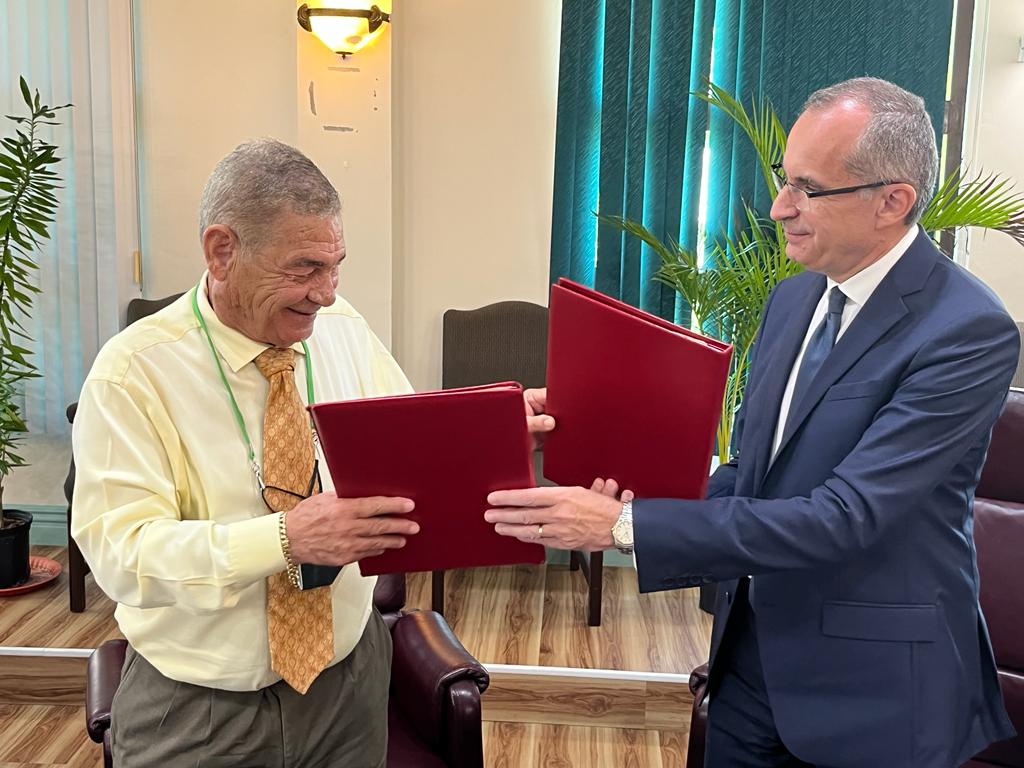 Efforts to make V. C. Bird International Airport a regional hub for air services took another positive step on Monday with the signing of an air-services agreement with France.

Representatives of Antigua and Barbuda and France initialed the document at a brief ceremony held at the Office of the Prime Minister.

This came just days after a similar agreement was signed between Antigua and Barbuda and Cuba on Friday.

Signing these agreements forms part of the government’s policy of establishing the V. C. Bird International Airport as a hub for both international and regional travel to take advantage of the country’s strategic location in the Caribbean archipelago.

The country lies midway between the northern and southern Caribbean.

Speaking on Monday, Aviation Minister, Sir Robin Yearwood, noted that the existing air services agreement between Antigua and Barbuda and France was signed in 1946 between France and the then colonial UK government. He said the time had come for modern arrangements to be established to facilitate and advance the development of aviation services between the two countries.

“On the economic side, the new agreement is a liberalised one, providing direct and so-called fifth freedom traffic rights for airlines from both countries to operate effectively and competitively. This is particularly important given the disruptions to air transport which have occurred in our region as a result of the devastation brought on by the COVID-19 pandemic,” he stated.

According to Sir Robin, based on the agreement reached in June last year, Antigua and Barbuda has designated two airlines – LIAT and Calvin Ayre Helicopters – to operate on the routes agreed with the French. The French have in turn designated four airlines – Air France, Air Antilles, St. Barth Commuter and St. Barth Executive – to operate services on their behalf. With the exception of Air France, all of these airlines currently operate flights into Antigua and Barbuda.

The aviation minister is hopeful that the agreement will pave the way for the return of Air France to Antigua and Barbuda.

For his part, the Acting Head of the French Mission to the OECS, Marc Mertillo said the agreement defines a new bilateral legal framework, in line with European law, including modern clauses which addresses safety, security and fair competition, as well as all operational modalities leading to the development of air services.

Chief Technical Officer in the Ministry of Aviation, Ambassador Brian Challenger, said the recent moves by the government are to put in place a legal framework that is as liberalised as possible to make V. C. Bird International Airport an attractive destination for international and regional airlines.

He added while the pandemic caused a dip in inter-regional travel, these new arrangements will make Antigua and Barbuda more attractive to airlines wanting to operate flights into V. C. Bird International Airport, a move, Challenger noted, which will also benefit LIAT.