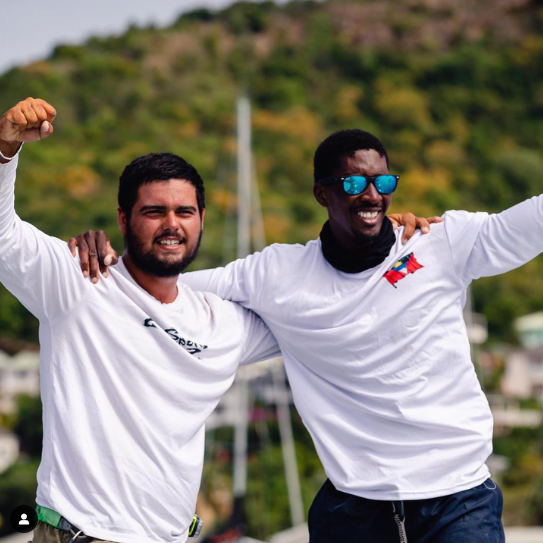 Travis Weste of Team Antigua Pairs has said he would like to participate once more in the annual Talisker Whiskey Atlantic Challenge.

In 2020, Weste and his partner Joseph “JoJo” Nunes formed Team Antigua Pairs to become the fourth team and the first pair to represent Antigua and Barbuda in the competition which is a fixture on the calendar of competitive rowers.

Although his former partner Nunes has indicated that he will not re-enter the Talisker Whiskey Atlantic Challenge, Weste is not ruling out the possibility of contesting the event as a solo competitor in a future event.

“Well, JoJo said he wouldn’t be a part of that again, not because of fear, but for him, it’s a one-time thing. I am thinking of doing it again. I would love to do it again. I have thoughts of doing it solo, but of course that’s a future thing I am looking forward to.

“Sponsorship is one of the biggest things and that’s the hardest part, but as long as I can secure the funding, I would definitely do it. I spoke to JoJo already, and he is in support of that. I wouldn’t say that I have it straight up in the pipeline, but it’s definitely something that I am thinking about.”

Weste and Nunes were among fifty-five rowers who participated in the categories Solo, Pairs, Trio and Fours in the 2020 Talisker Whiskey Atlantic Challenge, which starts each year in La Gomera in the Canary Islands.

Over the course of the race, athletes row 3,000 miles across the Atlantic before crossing the finish line in Antigua and Barbuda at Nelson’s Dockyard.

Team Antigua Pairs secured a 10th place finish when they crossed the finish line on 28th January, 2021, after 47 days, 6 hours and 57 minutes at sea.

Antigua and Barbuda is not represented in the 2022 Talisker Whiskey Atlantic Challenge, which is currently in progress.

This year’s competition has the participation of over 40 teams, comprising 120 rowers from 17 countries.

Ocean Cats, the first ever team from Spain to participate in the challenge, was the first team to finish the 2022 race.

Four more teams arrived on Monday, 23rd January, bringing to 21 the total number of teams who have so far completed the event.

Meanwhile, Weste emphasised the importance of the Talisker Whiskey Atlantic Challenge to the national economy.

He also underscored the significant boost the competition gives to sports tourism as the relatives and friends of the participants and supporters of the event often travel to Antigua and Barbuda to welcome the athletes as they arrive at Nelson’s Dockyard.

“After this 21 teams arrive, there is still 21 more teams out there that includes Fours, Trios, Solos and Pairs. It has been filled with a lot of emotions just seeing the families greeting the rowers and when they get to land and you see them step upon land, a lot of them say they didn’t expect the kind of support that they see on land, so, there is a lot of families around. It’s good for the economy,” Weste said.

“The race has been doing really good and it’s bringing a lot of people to our shores so that is really good for us. I would say it’s phenomenal having so many teams arriving in Antigua.

“So, Antigua has been on the map, well not only through the race, but it definitely does a lot for our sports tourism with the families and so forth that are coming across.

“So, every year we can look forward to a good economic boost, being that all these families and supporters are coming over to give this race some support.”