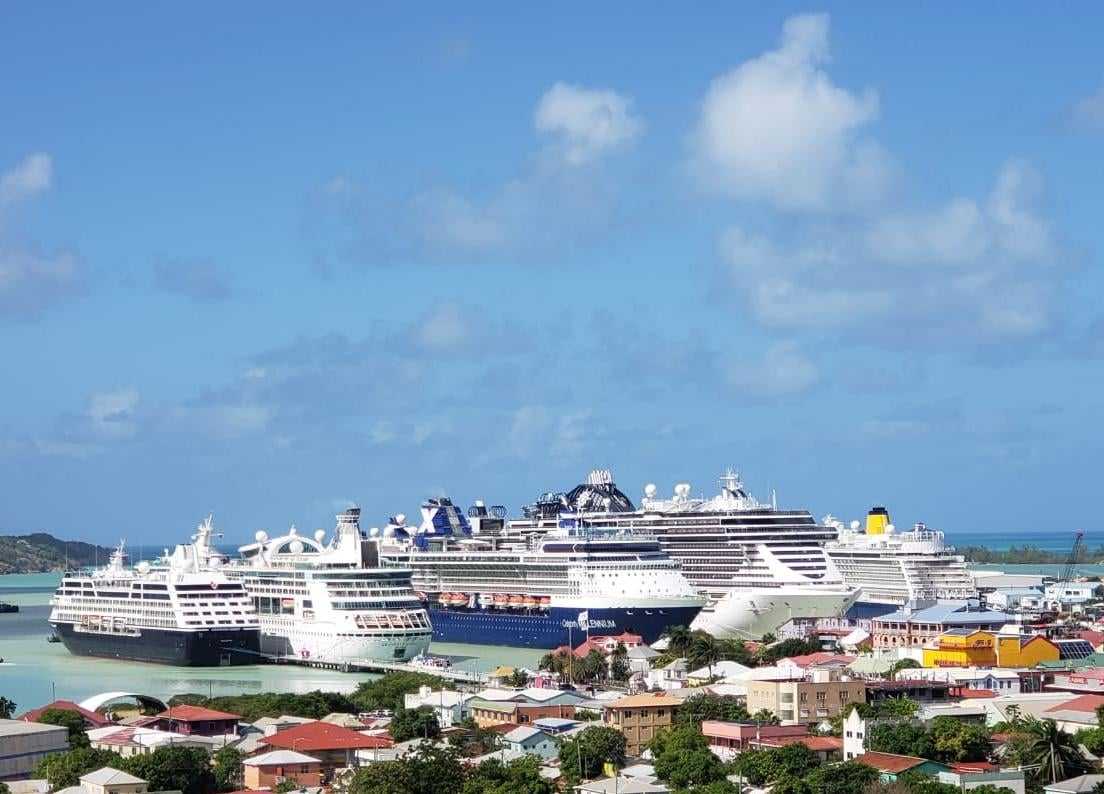 St. John’s buzzed with excitement over the weekend as citizens took advantage of the last day of the annual ABST reduction sale for early Christmas shopping. However, the Capital was a bit busier than usual with five cruise liners docked in the harbour.

According to the management of Antigua Cruise Port (ACP), Antigua is set to record its busiest month, with over 65 calls expected during the month of December 2021, which includes achieving the notable milestone of having five vessels in port.

“We reopened the cruise port almost 5 months ago with a very modest restart and we are pleased with our performance thus far. Saturday was very special for us, as the completion of the 5th berth earlier this year allowed us the capacity to now be able to receive more vessels in port, and seeing those five ships perched so beautifully at the cruise port was definitely a captivating sight,” said Dona Regis Prosper, ACP’s general manager.

“Recognizing that we are still within an active pandemic, we continue to work closely with the Ministry of Health & Wellness in the execution of protocols to ensure the safety of our guests, service providers, and residents. While still not back at 2019 levels, we are looking forward to a continued trajectory of growth,” continued Regis Prosper.

According to Antigua Port Authority general manager, Mr. Darwin Telemaque, “Today (Saturday) was a first for the government, people, and the Port Authority of Antigua and Barbuda. We berthed five cruise ships, including one vessel on the 5th berth. Congratulations to everyone who made this historic day possible: Government of Antigua and Barbuda, [Tourism Minister] Max Fernandez, [Port Authority chairperson] Senator Mary Clare Hurst and the Port [Authority] Board, Antigua Cruise Port. Special recognition to the contractor, Meridian Construction. Kudos to all.”

The V.C. Bird International Airport (VCBIA) was equally quite busy over the weekend with the official welcoming of French airline Air Antilles on Friday, launching what is being described as “greater regional connectivity”.

Air Antilles will also launch a direct nonstop service twice per week (Wednesday and Sunday) from St. Maarten to Antigua, with a connection to Guadeloupe.

It was also reported that over 11 international flights landed at the VCBIA on Saturday, the first of that magnitude since the country’s reopening.