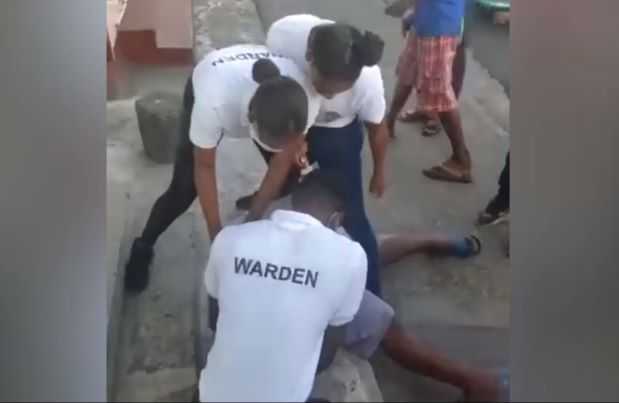 An arrest by COVID-19 Wardens in Castries went viral after someone posted a video recording on social media.

Police told St Lucia Times that they are aware of the video. But they have not issued an official statement.

However, according to an eyewitness, the incident unfolded on Saturday afternoon near the Ciceron Bus stand in Castries. The eyewitness explained that she arrived on the scene as three COVID-19 Wardens were trying to place handcuffs on a male individual. Two of the wardens were young women.

The woman told St Lucia Times that the man had not been wearing a mask. But in the video recording people also made reference to a knife.

“You all have guns, you all don’t want the man to have a knife,” someone declares.

The commotion, which attracted a group of onlookers, eventually ended with the officers taking the man into custody. But a relative told St Lucia Times that officers subsequently released the resident of Trou Rouge, Castries.

It was not immediately clear whether officers had charged him.

Police selected and trained one hundred and seventy-three individuals late last year and trained them as COVID-19 Wardens. They have been deployed in various communities to help ensure people comply with existing COVID-19 protocols.