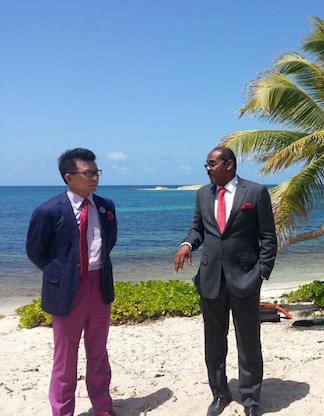 Prime Minister Gaston Browne says he is quite impressed with Yida Zhang’s economic investment into Antigua and Barbuda.

Zhang, the principal of Yida International Investment, has spent more than US$200 million on various projects in the country.

Prime Minister Browne was responding to the insinuations of UPP operatives who have attempted to paint the Yida project as a failure.

Quite the opposite, the prime minister said the investor has shown a deep commitment to both the project and to Antigua and Barbuda and added that the public should wish the investor well.

“Yida has invested over US$200 million in the country’s economy making it one of the most significant investments to date.

“Where the project has not made the kind of progress envisaged is that it is intended to be a free trade zone/special economic zone where Yida is trying to attract foreign direct investment in various sectors, both in services as well as the production of physical goods,” he explained.

Browne said the investor has “done his part” by developing important infrastructure for the project including roads, walkways, a concrete plant, a window factory, a steel fabrication plant and administrative buildings.

“There’s no doubt that Yida has shown a significant amount of commitment and I see him as one of the most committed investors to the country.

“He gave up his Chinese citizenship and now fully resides in Antigua and Barbuda. He is well vested in this project and his heart is in this project and for him to continue to stick to it, as well as to invite prospective investors, I think we should all wish him success,” Browne declared.

Of the money he invested into the country, the prime minister said that US$75 million went toward the purchase of the land and offshore islands that comprised the former Dato Tan Kay Hock Guiana Island project. Based on current market value, the estimated worth of the land is about US$185 million.

PM Browne said it was bewildering that the opposition UPP would brand the Yida project a failure when it has already injected $200 million into the economy and still has the potential to attract US$2 billion in investment which was projected at the launch of the development.

According to Browne, he met with Zhang last Friday to discuss upcoming investments in the project. Based on those discussions, the prime minister said there will likely be a major announcement in the coming weeks.