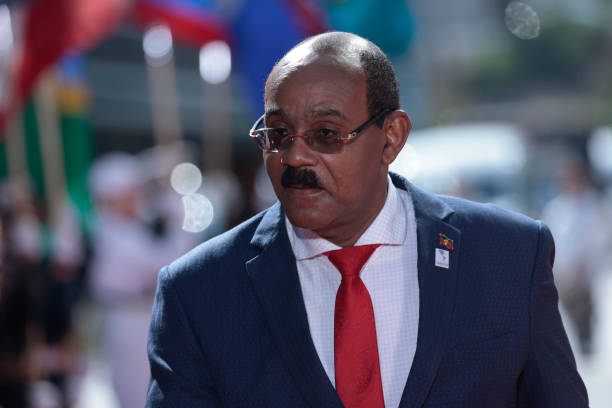 Prime Minister Gaston Browne used his Independence Day message to outline the achievements of the Antigua and Barbuda Labour Party (ABLP) on behalf of the country’s people for 31 of the 41 years of its political independence from Britain.

The prime minister drove home the importance of leadership as he contrasted the development the country enjoyed under 31 years of ABLP government compared with 10 years of setbacks suffered under the United Progressive Party (UPP).

At the time, the UPP was faced with navigating the world’s worst economic crisis in decades when the global economy crashed in 2008.

At the time, the UPP’s present leader, Harold Lovell, was the country’s Minister of Finance, and according to current finance minister Browne, the UPP’s record of failure in the aftermath of this crisis stands in stark contrast to that of the ABLP.

“Forty-one years of independence brought us these successes, having been left with a neglected, backwater of colonialism where inequities and inequalities prevailed.

“It is the vision, the commitment, drive and leadership competence that resulted in our accomplishments and fuelled our people’s burning ambition for advancement.

“And we should all recall that, for 31 of those 41 years of improvement and progress, it was the Antigua and Barbuda Labour Party that successfully managed the affairs of our nation for the benefit of all our people.

“Our progress should have reached higher heights; more should have been achieved for our nation and for every person within it. But we experienced 10 lost years; a lost decade under the former administration

“Many of you suffered through it, particularly between 2009 and 2014, when the nation’s financial affairs were mistakenly entrusted into the hands of a well-known financial novice, Harold Lovell, culminating in the worst performance of any finance minister in the history of our country and possibly in the history of the world,” said Prime Minister Browne.

Among the Labour administration’s achievements listed were improved infrastructure and healthcare, increased access to educational and housing opportunities, low levels of unemployment and the move to usher in an era of development on Barbuda.

He also pointed to the fact that under an ABLP administration, the country was able to navigate the worst global crisis of the last century, the COVID-19 pandemic.

“My friends, today, despite the ravages of the COVID-19 pandemic on our economy, and the turmoil caused by the consequences of the Russian war against Ukraine, your money in the bank is safe; businesses are no longer in deep distress; the banking system is stable; average national income has returned to a high level; and our Government has established successful mechanisms to give relief to the vulnerable.

“Yes, the world economy is in a crisis of high prices and high inflation, and, undeniably, those circumstances have affected our country just as they have impacted all others.

“The impact of COVID-19 has lingered globally, adversely affecting logistics and the supply chain.

“This has resulted in shortages and high prices, which, as part of the global community, we import.

“This situation has been worsened by the Russian war in Ukraine that created more shortages of food and ingredients for food production, as well as higher prices for oil, gas, and production of electricity and water.

“These were all circumstances not created in our country. No policy or action of the Government led to these conditions. All of them were due to external factors that we could not escape or avoid.

“But, your government did not wring its hands in despair, nor was it paralyzed in fear.

“Instead we expanded our social safety-net programs and, continue to subsidise the cost of petroleum products, thereby keeping the rate of inflation below those of other countries including developed countries.

“Although fear did grip the entire world in the face of the galloping spread of the Coronavirus which, to date, has killed almost 7 million persons worldwide, and infected more than 630 million people; we courageously and successfully adopted and implemented a pragmatic policy of working and living with COVID.

“Throughout the period of more than 2 years since March 2020 to now, we have limited the number of COVID-19 deaths in our society to 146 – that is 0.15 per cent of our population.

“Very few countries in the world have matched that achievement.