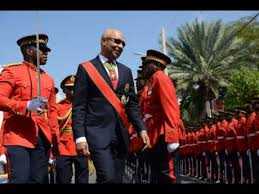 The usual pomp and pageantry that would take place for the ceremonial opening of Parliament was dimmed by COVID-19 containment measures.

This opened the curtains for a quick show as Members of Parliament and Senators descended from either side of Duke Street, observing the social distancing protocols.

Their entry was the antithesis to previous years of greetings, jeering, and cheering by supporters of both the Jamaica Labour Party (JLP) and the People’s National Party (PNP).

Though restricted to a wheelchair, Codlin said nothing could stop her from leaving her house on Mark Lane for the ceremonial opening.

She, however, was disheartened at this year’s staging, expressing that she does not believe things will go back to normal.

She added: “Things change, people change, even before COVID come in.”

Another JLP supporter, who requested anonymity, said she has been attending the ceremony for many years and expressed that she missed her counterparts and the usual excitement in supporting their party leaders.

One thing that stayed consistent with previous years, was the fainting of a JDF soldier, who was serving as a line marker.

Restricted to a corner on Sutton Road, about twenty PNP supporters were donning their party colours.

“Every year me come, I was late this morning but me a stay till it done,” said Anita Hall from Jungle, St Andrew Southern.

Though supporters were disappointed with the scaling down of activities, many expressed that they understood why these measures had to be taken.