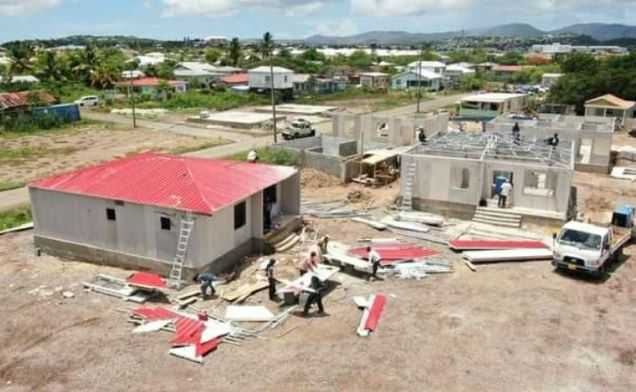 The owners of vacant land in Antigua will soon be able to benefit from a new initiative announced by Prime Minister Gaston Browne.

The initiative is designed to help resolve the need for the temporary housing of Booby Alley residents during the time it will take to complete a housing project in the Point area.

“Public Works has materials for another thirty homes and they are willing to use the material to build them on individuals’ lands. Those who have lands within the community will be given priority. They make the land available, Public Works constructs the home and they will get an automatic mortgage at a low interest rate and they can repay over a period of time.

“We will pay them rent for the period of time that they house the Booby Alley residents and after sometime they will pay the balance of the mortgage. That in itself is a great investment opportunity as it helps those persons who may not get the go ahead from banks regarding loans to build their homes,” Browne explained on his Browne and Browne Pointe FM show on Saturday.

The investment programme, Browne revealed, was initially geared toward members of the public who have vacant plots of land in the Villa and Point communities, however with the low response from landowners in the prioritised areas, the initiative has been extended to other villages.

PM Browne is encouraging the public to come on board.

The ninety cement bases which have already been laid as foundations for the temporary homes on Crown land at Bay Street and on Reginald Stevens Street, Browne hinted, could also be converted into rental homes following the permanent relocation of Booby Alley residents to their new homes once completed.

It is estimated that it will take two years for the Booby Alley Housing Project to be completed.

The latest Cabinet notes indicated the twenty-four month timeline for the highly controversial project which is underway.

The chattel houses in Booby Alley are to be replaced by ninety modern homes that are being constructed by the People’s Republic of China as a gift to the government and people of Antigua and Barbuda.

The houses will be offered to the area’s current residents when completed.

When everyone currently residing in Booby Alley has been placed in temporary housing, or has been relocated to vacant plots, the unsalvageable chattel houses will be demolished.

It is expected that the two-acre site will be leveled by January 31st, 2021. Only the buildings which house Papasita Destin’s Supermarket and the Bethel Anglican church will remain of the old community.

Last year, residents of Booby Alley protested the coming housing project as they believed they would be displaced from their homes. After a number of meetings with their Parliamentary Representative Gaston Browne, the conflict was resolved.

WIOC shares prospectus to be revealed in early December