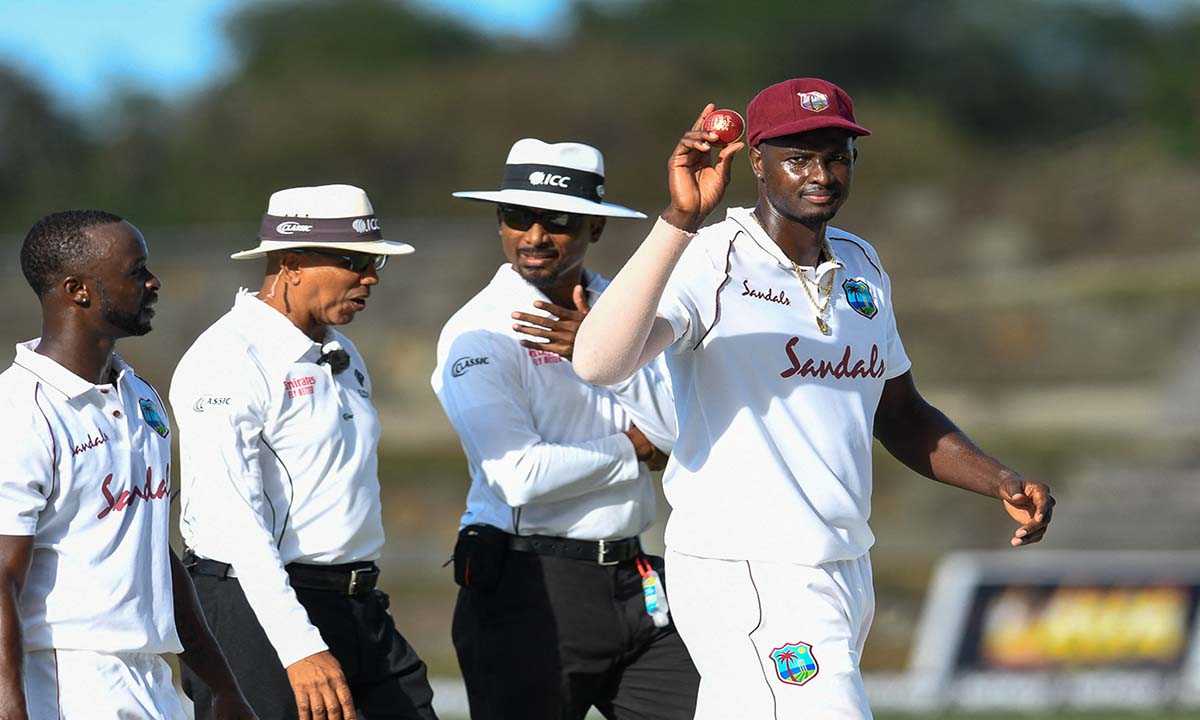 ESPNCricinfo – Kemar Roach and Jason Holder combined for eight wickets between them as Sri Lanka were bowled out for 169 on the opening day of the first Test in Antigua. Lahiru Thirimanne top scored for the visitors with a hard-fought 70 off 180 balls, but only three other Sri Lankan batsman would get to double digits, as they crumbled against a disciplined bowling performance from the hosts.

While it was Roach that was arguably the more impressive of the two, with his impeccable lines and lengths, it was Holder that would reap the benefits of the pressure created, picking up his eighth five-wicket haul in Tests. Roach, meanwhile would finish with figures of 3 for 47. John Campbell and Kraigg Brathwaite saw off an hour without any hassles, with West Indies ending on 13 without loss.

While Holder had been tight throughout the day, it was in an uninterrupted spell after tea that he burst into life. He picked up four of his five wickets during this spell, including the wickets of both Dickwella and Thirimanne – Sri Lanka’s last two recognised batsmen – just as the pair would have been harbouring hopes of fashioning an unlikely rearguard salvo, having put on 58 for the sixth wicket.

The first to go was Dickwella, who up until that point had played an uncharacteristically reserved innings. Having left several wide outside off alone, and having flayed a couple somewhat fortuitously backward of square on the offside, Dickwella finally produced the edge he had been teasing as Rakheem Cornwell completed a comfortable take at slip.

That would put a considerable dampener on an already slow scoring rate, the pressure of which would tell a few overs later as Thirimanne played on to his stumps, to one that was angled in from around the wicket – a tactic that the West Indies had employed across the board to Sri Lanka’s left-hand batsmen.

Holder would then have Suranga Lakmal out caught in his next over before trapping Lasith Embuldeniya lbw to close-out the innings, either side of Roach producing an absolute ripper to oust Dushmantha Chameera’s off peg.

Roach had undoubtedly been the standout performer until that point, exemplified by his spell after the lunch break, when he picked up the wickets of both Dhananjaya De Silva and Pathum Nissanka.

His first victim was De Silva; having got a few to move away past the outside edge of the right-hander, he eventually got his man, luring him into the drive but this time seaming the ball back in past the inside edge to clip the top of off stump. It was a well setup wicket, and one that was just reward for a consummate Test-match spell.

And it was more of the same for Roach’s second. Immediately after the drinks break, he would get another good length delivery to move ever-so-slightly away from the batsman – this time Nissanka – whose gentle defensive prod could only find its way to first slip.

Much of the damage for the visitors however took place in the morning session when they yet again lost their top-order for barely 50 runs on the board. Cornwall and Holder had picked up a wicket a piece, while Kraigg Brathwaite had effected a splendid runout.