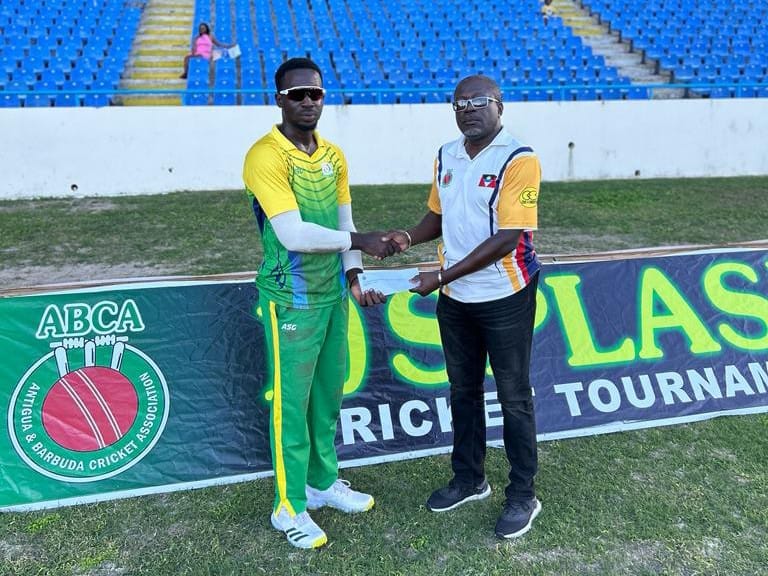 Unbeaten Empire Nation romped to an emphatic 40-run victory over Caribbean Union Bank (CUB) Bethesda Golden Eagles in a rain affected match to book their spot into the semifinals of the Antigua and Barbuda Cricket Association’s (ABCA) 10 Splash on Monday, 16th January.

With the two top teams in each group qualifying for the semifinals, Empire Nation secured their fourth win in five matches to end the preliminaries as the unbeaten Zone B winners, cementing their place in the last four knockout round.

In a match already reduced to seven overs due to rain, Bethesda Golden Eagles, who were chasing a victory target of 82 runs, made it to 41 for 1 in four overs when rain brought a premature end to the encounter.

Opener, Shacoy Floyd, was unbeaten on 25 off 13 balls with 2 fours and 2 sixes while captain Gavin Tonge, who opened the innings, made 10 for the Golden Eagles.

Empire Nation, who were sent into bat after losing the toss, raced to 81 for 2 off their seven overs.

Captain Kenrick Scott slammed an unbeaten 35 off 19 balls with 4 sixes.

All Saints Pythons or Jennings Tigers each have the opportunity to capture the vacant semifinal spot in Zone B Empire Nation should they emerge the runner up behind Empire Nation.

Jennings Tigers kept their semifinal hope alive by pulling off a 20-run victory over Combined Schools in their final preliminary round match which was affected by rain on Monday.

In a match reduced to seven overs due to rain, Jennings Tigers made 78 for 3 after winning the toss and electing to bat.

Jedidiah Martin made 16 not out while Xaveek Toppin captured 2 wickets for 9 runs.

In reply, Combined Schools were restricted to 58 for 4 off their 7 overs with Paul Miller picking up 2 wickets for 6 runs.

Opener Melique Jacobs slammed 31 off 13 balls with 3 sixes and 2 fours.

The win lifted Jennings into second place with 14 points, but the Tigers can be displaced by All Saints Pythons if they secure a victory in their final preliminary match against Freetown and a superior net run rate.

PIC Insurance Liberta Black Hawks and Pigotts Crushers have already advanced to the semi-finals as the two qualifiers from Zone A.