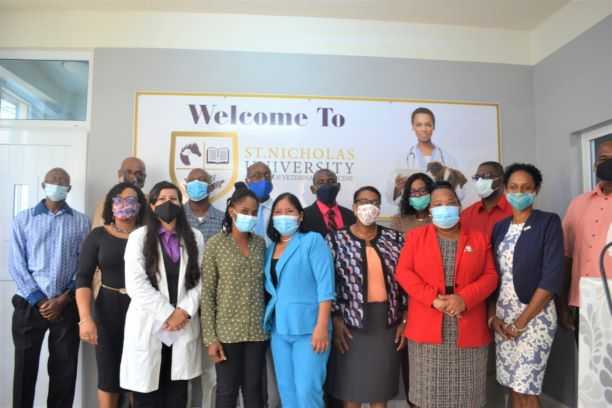 On Friday, 29th January 2021, Dominica became the only Caribbean country with a university that focuses solely on veterinary studies.

This, according to the president of the St Nicholas University School of Veterinary Studies, Golnaz Naderkhani, MD Ph.D., who spoke during the official opening ceremony at the school’s current location on the corner of Hillsborough Street and Kings Lane in Roseau.

Dr. Naderkhani made known that unlike the other medical schools in the region that also provide veterinary medicine education as a side branch, her university is one hundred per cent focused and dedicated to providing training in that discipline.

She said the pillars of her university are quality education, student-centered training, accessibility and affordability, sustainability, being at the heart of the community, personal learning experience, heritage and tradition, and character and morality.

The Canadian doctor, who moved to Dominica following the passage of Hurricane Maria, informed the audience that very soon, Dominica will be the first to boast of having a specialized veterinary hospital capable of providing world-class care, equipped with a radiologist, pathologist, internist, orthopedic surgeon, oncologist, as well as an agro medicine and critical care specialist.

Due to the ongoing COVID-19 pandemic, she explained that students from high-risk countries such as the United States, Canada, and other Caribbean islands were not allowed to begin this semester, but will join in September of this year. Therefore, only ten students—all females—will be part of the very first class of students on 1st February.

Dr. Naderkhani emphasized that once the international students are allowed into the university, this will result in new opportunities for many Dominicans.

Minister of Education and Human Resource Development, Hon. Octavia Alfred, who also spoke at the opening ceremony, stated that the opening of the medical school is an important milestone for all stakeholders and this must be celebrated.

“For the government and people of Dominica, this presents an avenue to assist our young people who may be seeking advancement in this field to acquire a degree at home while opening up new opportunities for economic activities due to the presence of the university here,” she stated.

Alfred stressed that the success or failure of the school will hold important implications for the Government, and pledged their commitment to providing support to growing the institution’s reputation so that it may attract a cadre of young professionals eager to increase their skills and knowledge through the acquisition of a sound education in Dominica.

According to her, “We need more veterinarians here who can play an essential role in promoting animal welfare.”

Adding his voice to the commendations, Former Chief Veterinary Officer Dr. Reginald Thomas noted that there will no longer be a need to import veterinarians into the country from other parts of the world.

He said that the journey to realizing the establishment of the university in Dominica, has not been an easy one and he thanked the President for her “steadfastness” in achieving this dream and for choosing Dominica.

US offloads US$8.5M of drugs seized in Caribbean Sea