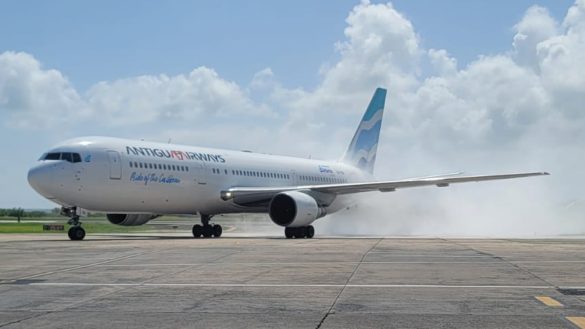 Travellers interested in flying Antigua Airways to the Motherland, Africa, will still have to wait a bit longer as there is still no definitive date when commercial flights will begin.

During the Post Cabinet Press Briefing yesterday, Chief of Staff in the Prime Minister’s Office, Ambassador Lionel “Max” Hurst explained that the airline’s operators are still awaiting approval for the Air Operator Permit (AOP) that will allow them to commence offering commercial flights.

Efforts are, however, being made to ensure that the airline meets the strict requirements needed to receive the green-light.

“The problem has been that although submissions have taken place, the issuing authority here, the Eastern Caribbean Civil Aviation, requires far more information for it to issue the licence. At least this is what we have been told by the ECCA.

“It looks as though Antigua Airways is moving towards meeting those guidelines so that ECCA can in fact issue the licence so that it can become a regular carrier,” Hurst explained.

Antigua Airways is a privately owned company whose Nigerian investors enjoy the full support of the government of Antigua and Barbuda.

Once fully operational, the airline which was launched earlier this year will provide the twin island nation’s first direct air connection to West Africa.

Antigua and Barbuda is a shareholder in the company and will receive  20 percent of the profits generated by the airline.

The newly established airline’s first flight to the country was a charter which landed at the V. C. Bird International Airport on Independence Day.

Over 100 passengers were on board, including the Chief Executive Officer of Euro Atlantic Airways, Eugenio Fernandes, whose company is a partner in the enterprise, and Founding President of the Nigeria Antigua and Barbuda Chamber of Commerce, Emmanuel Samson.

Antigua and Barbuda and the USA agree to strengthen relations