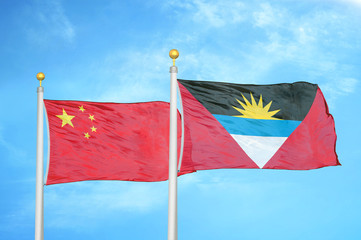 The official event to mark the 40th anniversary of the establishment of diplomatic relations between Antigua and Barbuda and the People’s Republic of China (PRC) takes place today at the Office of the Prime Minister when officials from both governments will participate in a flag raising ceremony.

The actual raising of the flag will follow a ceremony and brief addresses from the PRC’s ambassador to Antigua and Barbuda, Zhang Yanling, Foreign Affairs Minister, E. P. Chet Greene and Prime Minister Gaston Browne.

Permanent Secretary in the Ministry of Foreign Affairs, Anthony Liverpool, will chair the proceedings.

Both PM Browne and FM Greene are expected to focus on the PRC’s support for Antigua and Barbuda’s development through grants and concessionary loans which have allowed the government to undertake critical national development.

The PRC has been described by PM Browne as “perhaps the most important developmental partner for Antigua and Barbuda over the past several decades”.

He has often recognised the PRC’s role in the construction of the new V. C. Bird International Airport terminal, the expansion of the St. John’s Harbour, the Sir Vivian Richards Stadium and the Big Creek Bridge, all of which were financed through Chinese loans or grants.

Last month, the PRC opened its first purpose-built embassy and residence in the Eastern Caribbean in St. John’s. It has been hailed as a symbol of the strong bond of friendship that exists between the PRC and Antigua and Barbuda.