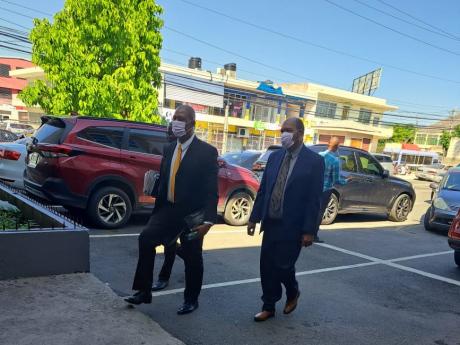 Antigua and Barbuda’s Director of Public Prosecution, Anthony Armstrong, who is facing fraud charges in relation to three land transactions, is to know on Thursday whether his passport will be returned to him.

The Jamaican attorney-at-law was arrested on Saturday on his arrival at the Norman Manley International Airport and later charged with conspiracy and fraudulent conversion.

His passport was confiscated by the court when he appeared on Monday.

According to the Jamaica Gleaner, he was released on J$500,000 bail.

The charges reportedly stem from the sale of three properties 18 years ago in Jamaica, in which Armstrong represented the complainant, who was the vendor.

The complainant in the matter reported Armstrong to the General Legal Council (GLC) over the matter.

The Disciplinary Committee of the GLC in February found that Armstrong was guilty of professional misconduct for signing as witness to a document for a client who was not present.

On Monday morning when the matter was brought before the Kingston and St. Andrew Parish Court, attorney-at-law Hugh Wildman, who expressed shock at the arrest of his client, said the charges against Armstrong were baseless.

Wildman said that the GLC had found his client not guilty of the charges related to the sale of the properties and added that the complainant is a self-confessed rogue and drug trafficker who is trying to muddy his client’s reputation.

Wildman also asked that his client’s passport be returned.

The investigating officer in the matter objected to the return of Armstrong’s passport.

She told the court that the police had asked Armstrong to come in for an interview in August, but he refused.

He contended that his client returned to Jamaica to cooperate with the investigation and was under the impression that he would only be interrogated. Instead, he was arrested and charged.

Wildman also rejected the accusation that his client refused to come in to be interviewed.

Parish Judge Venise Blackstock Murray indicated that she would rule on the passport request this Thursday.

Meanwhile, Crown Counsel Shannon Jones-Gittens is tipped to act as DPP here in Antigua and Barbuda until further notice.

There has been no word from the Attorney General’s chambers on this unfolding saga since it confirmed that an Interpol Red Notice was issued for Armstrong’s arrest on 31st October but was withdrawn on 1st November.