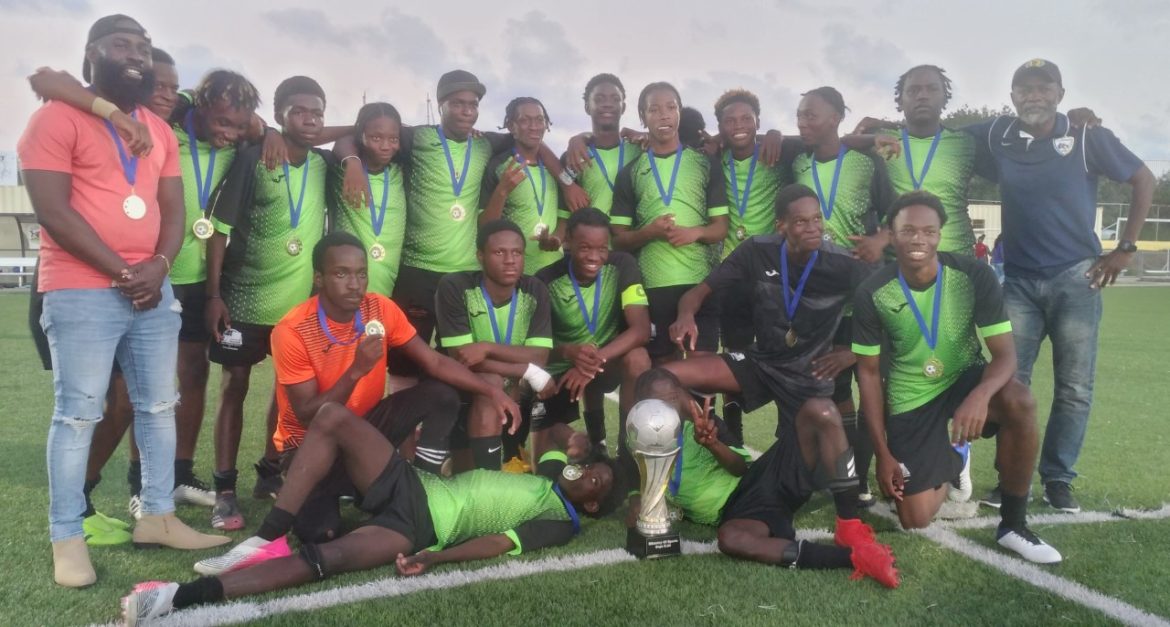 The Antigua and Barbuda Institute of Continuing Education (ABICE) has won the Under-20 or Senior Boys’ Division of the 2022/23 Ministry of Sports Secondary Schools’ Football League.

ABICE secured the championship by overcoming All Saints Secondary 5 – 4 on penalties in a keenly contested final at the Antigua and Barbuda Football Association’s (ABFA) Technical Center last Friday.

The game was decided by penalties after both teams played to a 0 – 0 draw at the end of regulation time.

ABICE and their supporters burst into jubilation after Roshane Brookes scored the fifth and winning penalty to secure the title.

Coach Rohan “Porridge” Benjamin, who is also the coordinator of the schools’ football programme, expressed his happiness with ABICE’s success.

“I am feeling very happy with these boys here.

“When I arrived there, I told them that we have a goal and the goal is to win this championship. We can do it!” Benjamin said.

“I am actually in their chat group, learning some of these language that they are speaking.”

Coach Curtis Charles also expressed his satisfaction with the way All Saints Secondary played during the season in which their loss to ACBICE was their only defeat in the Under-20 Boys campaign.

“I think that the boys played very, very well. The only thing is that we didn’t score during regular time.

“This game is the only game that we would have lost out of fifteen games for the season,” Charles said.

“I think the guys have done very, very well, and so, I must congratulate them.

“I must also congratulate the winners, ABICE. They played well.

“It was a good experience.  We started training since March (2022) and I was really expecting these guys to take the trophy this time around, but it didn’t happen. However, I think that they played very, very well.”

Ottos Comprehensive School captured the bronze medal by prevailing 1 – 0 over the Antigua State College in the third-place playoff at the same venue last Friday.

Joshua Arias scored the lone goal of the match.

These encounters brought the curtains down on the 2022/23 Secondary Schools’ Football League which kicked off in October last year.