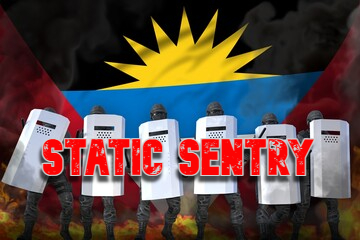 Public Safety minister, Steadroy Benjamin, has confirmed that there were no reports of school break-ins or vandalism since the start of a national security forces-led operation.

Operation Static Sentry was proposed by the Antigua Barbuda Defence Force (ABDF) earlier this month to support the government’s efforts to curb the increase in burglaries and malicious damage at public schools.

The operation is being conducted by the ABDF in partnership with the Royal Police Force of Antigua and Barbuda.

The operation is a short-term measure aimed at providing adequate security on public school plants that will beat back the criminals who have caused serious disruptions in the education system.

From all indications, Minister Benjamin has said that Operation Static Sentry is proving effective.

“I’m very satisfied. As a matter of fact, since we have introduced the system at the schools, there has been not one break-in since that point. It means therefore, that the government’s plans are working, that the Defence Force and Police Force working together are doing a fantastic job!” Minister Benjamin said.

The temporary security plan will remain in place until the government finalises arrangements to install electronic security systems at public schools.

The frequent school break-ins have resulted in the theft of equipment and appliances and thousands of dollars have been expended to repair damaged doors and windows.

Static Sentry came into being after the government was threatened with strike action by the Antigua and Barbuda Union of Teachers (A&BUT) who expressed frustration with school security failures.

The government said the prohibitive cost of round the clock security did not make that option to tackle the problem feasible.

National security experts were called in to devise a plan following negotiations between the government and A&BUT and a proposal to handle the issue was swiftly prepared by the ABDF.

Many people, including Minister Benjamin, have taken the position that the targeted school attacks could be politically motivated as elections are due in less than six months.

“We feel regrettably, however, that these [attacks] may be driven by political considerations. This is the season and notice, all of a sudden, these things are taking place.

“Be mindful; education is something for our future, for our children and they are the future of tomorrow.

“Please, don’t destroy the [school] plants; there is where our children are educated to build Antigua and Barbuda to be a success in the future,” Benjamin pleaded.

With the arrival of Antigua Airways less than a week away, tourism authorities are finalising plans to receive the inaugural flight’s 150 passengers.