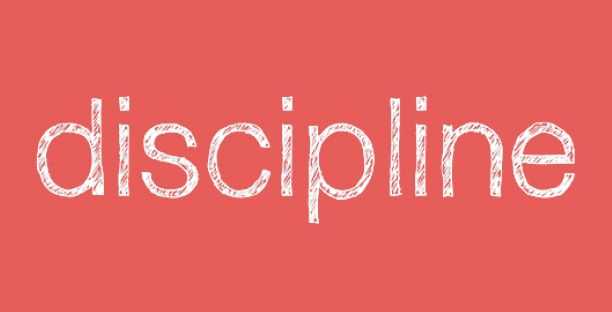 When many hear the word ‘discipline,’ it is common for the first association to be with a form of repressive control, such as in a school environment where coercion might be used to get students to comply with rules. While that is one sense of the word in the English language, discipline encompasses much more than punitive action.

Indeed, if one were to look at the etymology of the word, one realizes that discipline shares a common origin with the word ‘disciple,’ someone who follows another. In the Holy Bible, for example, we read of the twelve disciples who followed and learned from Christ. In a similar sense, discipline also refers to the act of following a system that is designed to aid in the mental and physical improvement of the follower.

By their very nature, societies have been structured around some sort of system that contains discipline as one of their major underpinnings. In fact, one can argue that it is perhaps one of the most important ingredients for success, both at the individual level and at the national level. Recent history is replete with examples of how personal and national discipline can assist in producing benefits to a society.

Japan and the Cuba stand as two important examples in the modern era. On the one hand, Japan was decimated by two atomic bombs deployed by the United States in response to attacks on Pearl Harbour. The carnage and destruction were on a scale that had not been seen prior in a single detonation of a bomb. In the aftermath, Japan needed serious rebuilding, and it came through hard work and discipline. Today, the Japanese are considered to be among the most disciplined on the planet, and it is demonstrated in their economy and people as an example of how personal discipline can positively impact the national programme.

Cuba, on the other hand, is subjected to one of the most unjust economic embargoes the world has ever seen. Imposed primarily by the United States, the people of Cuba are barred from access to basic things such as medicines and food. Though this action has caused tremendous hardship in the country, year after year the Cuban people have offered thousands of scholarships to people from all over the world, Antigua and Barbuda including; they have sent their medical personnel in many parts of the world to assist with alleviating some of the most severe medical challenges. With the COVID-19 pandemic ravaging the world, Cuba, as isolated as it has been made to be, is on the brink of developing a vaccine for the virus. All of these things took an enormous amount of hard work and discipline. Ask anyone who has visited either Japan or Cuba what stands out most about the people, and discipline usually surfaces somewhere in the discussion.

In Antigua and Barbuda, we often have a tendency to view discipline as taboo since we have narrowed the definition to the aforementioned punitive association. However, discipline is an essential aspect of success, as demonstrated by Japan and Cuba.

At the level of government, for example, an essential ingredient for success is fiscal discipline. But fiscal discipline is not only applicable to the government, as individuals have a responsibility to be fiscally disciplined as well. Fiscal discipline entails managing our earnings in such a manner that we do not live above our means. For example, if a person’s salary is two thousand dollars monthly and one has a family, it would be madness to rent a property that costs fifteen hundred dollars monthly. That is the very definition of fiscal indiscipline.

The question of discipline goes beyond personal finances and into such realms as relationships, marriage, business, and personal success. Some would even argue that discipline is a necessary foundation for integrity. It therefore becomes very frightening when one observes the level of indiscipline within our society because a society whose citizens does not regulate themselves flirts with anarchy, a kind of dystopian possibility. It is the kind of possibility that must never become a reality.