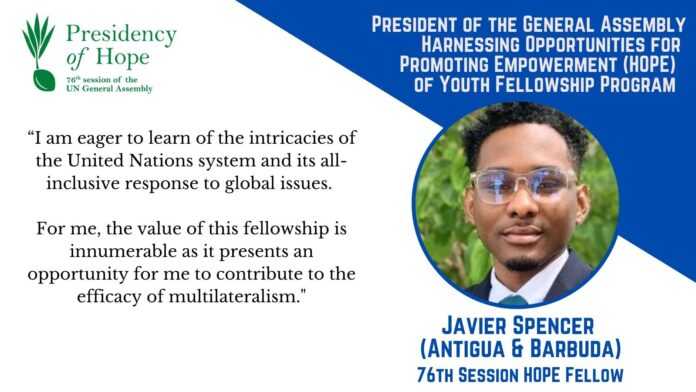 Young Antiguan and Barbudan diplomat, Javier Spencer, has been selected to participate in the inaugural President of the General Assembly’s Harnessing Opportunities for Promoting Empowerment of Youth Fellowship (the PGA’s Fellowship for HOPE).

The Fellowship for HOPE, which takes place under the patronage of His Excellency Abdulla Shahid, 76th President of the UN General Assembly, will seek to promote youth engagement in multilateralism and support the next generation of diplomats, particularly from underrepresented countries at the United Nations.

President Shahid said of his hopes for the first participants in the fellowship: “As a small-islander who has seen and experienced the struggles of so many countries in keeping up with the rest of the world on the diplomatic stage, I know that they will walk away with knowledge and skills to support their nations as true multilateralist.”

Spencer, who is employed as a Foreign Service Officer in the Ministry of Foreign Affairs, Immigration and Trade, will undertake the fellowship alongside seven other young diplomats who were selected by an independent three-member panel which consisted of one member state, a representative of the UN system, and a representative of the Civil Society Organization.

The fellowship will allow participants to acquire a deeper understanding of the United Nations through their work in the Office of the PGA.

Fellows will work on a range of thematic issues affecting the world.

They will be attached on a rotation basis with the teams of the Office of the President of the General Assembly (OPGA) – Peace & Security; Human Rights; Humanitarian; Sustainable Development; Reform, Legal & Budget and Communications.