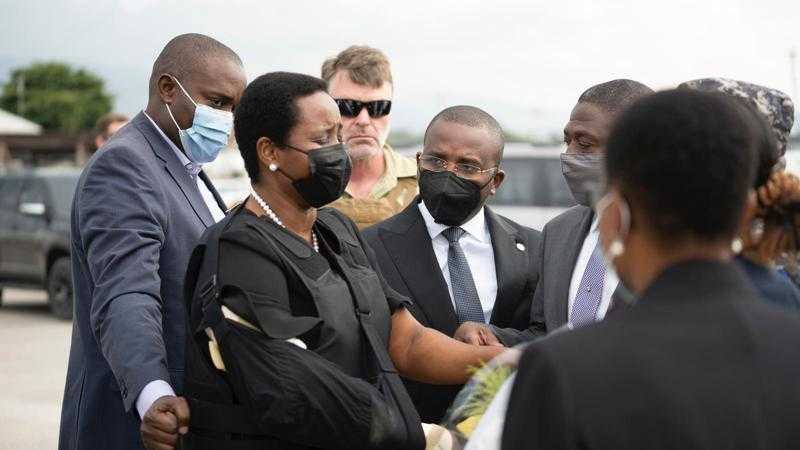 Associated Press – Haiti’s political future on Sunday grew murkier after the surprise return of first lady Martine Moïse, who was released from a hospital in Miami where she was treated for injuries following an attack in which the president was assassinated.

Martine Moïse did not make any public statements after she descended a private jet wearing a black dress, a black bulletproof vest, a black face mask and her right arm in a black sling as she mourned for President Jovenel Moïse who was killed July 7 at their private home.

Some experts — like many in this country of more than 11 million people — were surprised at how quickly she reappeared in Haiti and questioned whether she plans to become involved in the country’s politics.

“The fact that she returned could suggest she intends to play some role,” said Laurent Dubois, a Haiti expert and Duke University professor. “She may intervene in one way or another.”

Martine Moïse arrived just hours after a prominent group of international diplomats issued a statement that appeared to shun interim Prime Minister Claude Joseph, the man currently running the country with the backing of police and the military.

Joseph’s name was never mentioned in the statement made by the Core Group, composed of ambassadors from Germany, Brazil, Canada, Spain, the US, France, the European Union and representatives from the United Nations and the Organization of American States.

The group called for the creation of “a consensual and inclusive government,” adding, “To this end, it strongly encourages the designated Prime Minister Ariel Henry to continue the mission entrusted to him to form such a government.”

Henry was designated prime minister a day before Jovenel Moïse was killed. He did not respond to requests for comment.

The UN, OAS and US State Department did not offer further explanation when contacted.

Given the current state of Haitian politics, Dubois said he believes the arrival of Martine Moïse could have an impact.

“She’s obviously in a position to play a role … given how wide open things are,” he said, adding that the Core Group’s statement is striking because it makes no reference to Joseph. “One has to wonder whether the developments in the investigation have anything to do with this. They’re all these puzzle pieces that are just changing moment to moment. Right now it seems very hard to figure out how to put these together.”

Authorities in Haiti and Colombia say at least 18 suspects directly linked to the killing have been arrested, the majority of them former Colombian soldiers. At least three suspects were killed and police say they are looking for numerous others. Colombian officials have said that the majority of former soldiers were duped and did not know of the assassination plot.