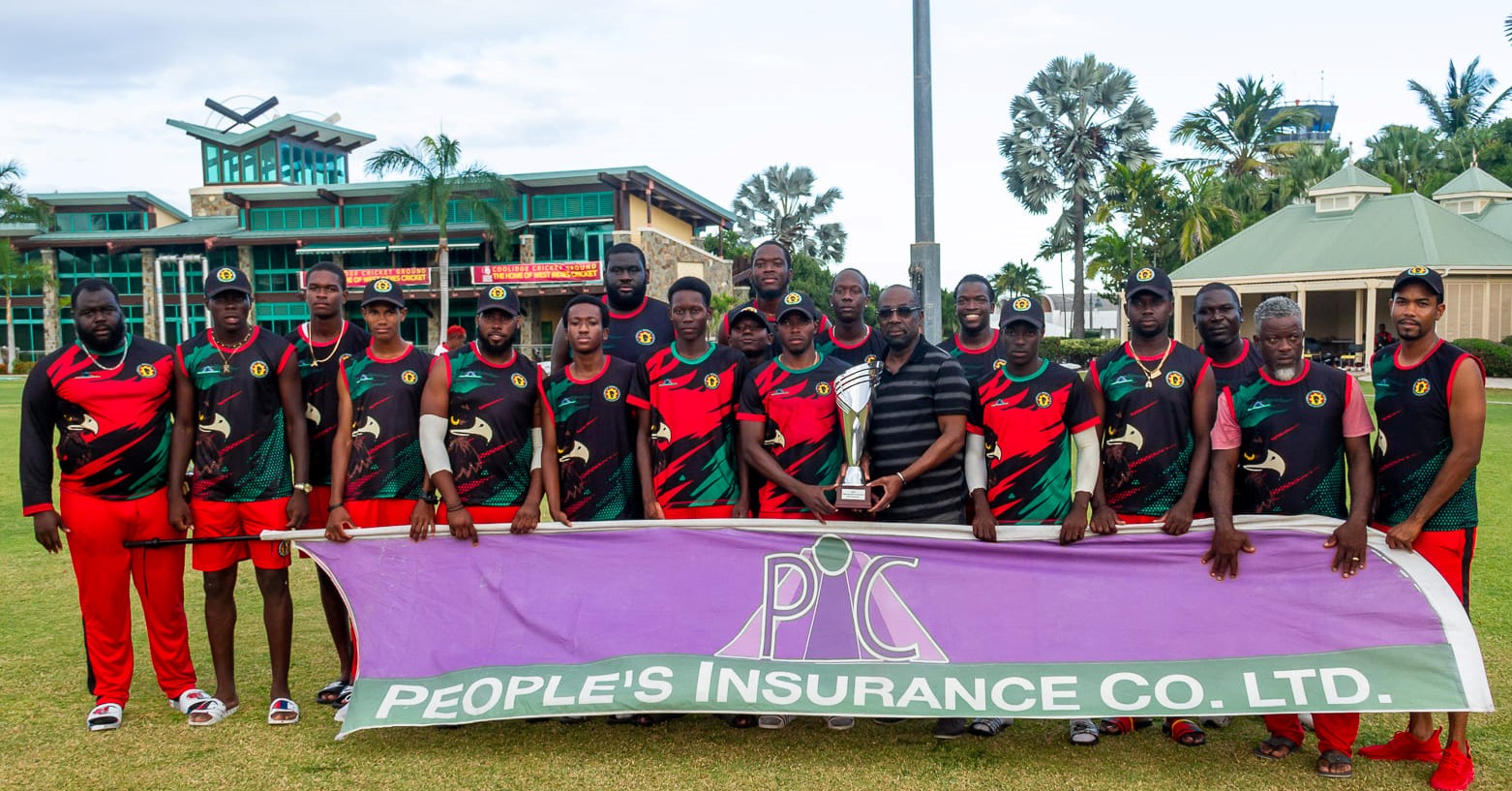 Member of Parliament for the Constituency of St. Paul’s, E. P. Chet Greene, has lavished praise on the PIC Insurance Liberta Blackhawks for winning their 13th Antigua and Barbuda Cricket Association’s (ABCA) Super-40 championship in the last 15 competitions.

The Blackhawks regained the Super-40 championship title, formerly the State Insurance Limited Overs Competition, with an emphatic 83-run victory over Pigotts Crushers in the final at the Coolidge Cricket Grounds (CCG) on Sunday.

During the presentation ceremony following the final, Greene commended the Liberta Blackhawks for maintaining their dominance of domestic cricket in Antigua and Barbuda.

“Today is not a day for speeches, but a day to allow Liberta and Libertans to celebrate amongst each other. You can all understand that today is Liberta day.

“To the PIC Blackhawks I say congratulations. You have maintained your tradition; a rich tradition of the Liberta community of winning. And so, congratulations are in order to you; players, coaching staff and management staff. Once again, we have proved our dominance in local cricket,” Greene said.

“I want to set the record straight; we are the winningest team in cricket in Antigua and Barbuda and we will continue to win under the watch of Kenneth Benjamin our coach and a cadre of players who make my community proud. God bless Liberta!”

Greene also joined the President of the Leeward Islands Cricket Board Enoch Lewis in commending the ABCA for hosting the semi-finals and final of the limited overs contest at the CCG, the home of Cricket West Indies (CWI).

Greene took a parting shot at ABCA’s President Leon “Kuma” Rodney over the Government of Antigua and Barbuda’s investments in the sport, and its partnership with CWI in purchasing the CCG after the fall of disgraced investor Allen Stanford.

“Let me also commend the ABCA on this particular competition – the COVID conditions, the country recovering, rebounding – cricket is like a religion in our country, it is being used as a path in recovery.

“The president of the Leeward Islands board made a comment which I identify with, in that our players must be exposed to the use of our top-notch facilities when we have finals of cricket, and I dare say, any sport in this country,” Greene said.

“Unlike the president of the ABCA’s view that nothing has been done by any of the governments, I want to remind him that the government of Antigua did invest in this facility to make sure that cricket can be played internationally here in Antigua and Barbuda.”

Enoch Lewis, a former president of ABCA, expressed satisfaction with the role played by cricket’s governing body in ensuring the sport thrives locally.

“I am pleased that the board of directors in the ABCA are doing a fantastic job in ensuring that cricket is being played across the island. Let me also take time to say thank you in a big way to the sponsors of the teams, the sponsor of the tournament, to the CCG owners for making the facility available,” Lewis said.

I also want to say congratulations to the Pigotts cricket team for coming this far; Pigotts came up against a team that has international bowlers in its midst. And so, competing against that should only make them better going forward.

“Of course, I have to say congratulations to the champions. I think they were favourites coming in and they played like favourites and they won the tournament for yet another year. Congratulations are in order to the Liberta Blackhawks.

“I want to say special congratulations to the ABCA for playing the games at this facility. These players aspire to play at the international level and when it comes to a final, you need to have international facilities available because that is exactly what they should play on.”

Set a challenging 234 to win the final, Crushers tumbled to 150 all out in 37.3 overs with Kofi James grabbing three for 11. Demari Benta led the Crushers batting with a top score of 52 off 66 balls, including eight fours and a six. Opener Kadeem Henry chipped in with a quick-fire 25 and Malique Walsh contributed 18.

Allrounder Kadeem Phillip and middle-order batsman Amahl Nathaniel struck half centuries in Liberta’s total of 233 for nine off their allotted 40 overs after they were sent in to bat.

The pair shared in an 81-run sixth wicket stand after the Blackhawks were reduced to 130 for 5. Phillip hammered 53 off 27 balls, with 4 sixes and 2 fours, while Nathaniel cracked 51.

Avier Christian with 42 and Uri Smith with 35 also shared in a 64-run second wicket partnership after the Blackhawks lost their first wicket with the score on 3.

Twenty-four hours earlier, All Saints Pythons secured third place in the competition by coasting to a comfortable six-wicket victory over Empire Nation at the same venue.

Set 188 to win, All Saints achieved victory by scoring 189 for 4 with 3.3 overs to spare. Opener Michael Dover hammered 72 and was involved in a 91-run opening stand with Teran Payne who struck 35.

Dimitri Lucas chipped in with 28 while captain Kerry Mentore made an unbeaten 18 at the end. Former national leg-spinner Lynton Africa captured two for 36.

Earlier, a six-wicket stand of 77 runs by all-rounder Justin Athanaze and Garry Duberry was largely responsible for Empire’s total of 187 for eight off their 40 overs.

The pair came together with Empire tottering on 97 for 5 and were able to revive the innings with Athanaze hitting 60 and Duberry getting 20. Malique Marcellin bagged three for 41.