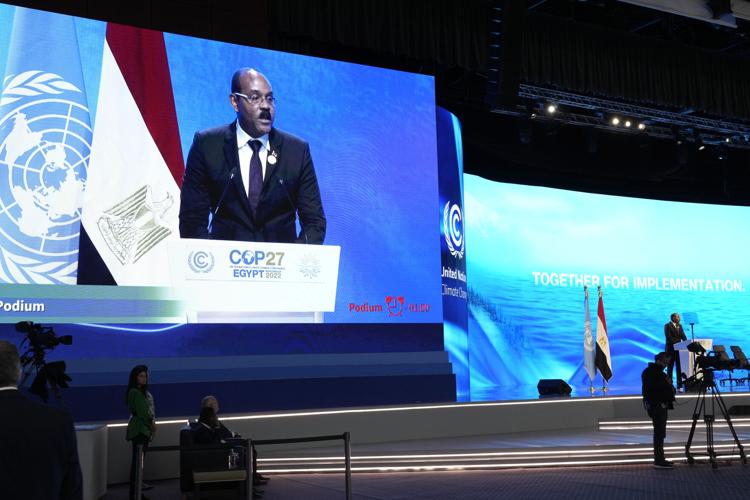 Small island nations suffering some of the worst impacts of climate change want oil giants to pay for damage from climate change and rising sea levels.

On Tuesday at COP27 Prime Minister of Antigua Gaston Browne said that it was high time fossil fuel companies were made to pay a “global carbon tax” on their profits as a source of funding for loss and damage.

“Profligate producers of fossil fuels have benefited from extortionate profits at the expense of human civilization. While they are profiting, the planet is burning,” he told attendees at the climate conference on the second day of speeches from heads of state and government.

Browne also pointed out that in the first half of this year six fossil fuel companies alone had made nearly €70 billion in profits – “more than enough money to cover the costs of major climate damages in developing nations”.

The idea for a windfall tax to fund loss and damage was proposed by UN Secretary-General Antonio Guterres on the first day of the climate conference.

“Those who contributed least to the climate crisis are reaping the whirlwind sown by others,” he said.

“[This is why] I am asking that all governments tax the windfall profits of fossil fuel companies.”

Guterres said that the money should be redirected to those struggling with rising food and energy prices, as well as countries facing loss and damage caused by the climate crisis.

Speaking on behalf of the Alliance of Small Island States (AOSIS), the Prime Minister of Antigua also called for an end to fossil fuel subsidies and collective action to reduce emissions.

“Financing to address loss and damage and a recommitment to keeping 1.5 alive in the face of the current energy crisis, are the key critical success factors of COP27.”

Other members of AOSIS echoed Browne on the injustices for those on the frontlines of the climate crisis.

“Like other islands, our contribution in the destruction of the planet is minimal, yet we suffer the most,” said Wavel Ramkalawan, President of Seychelles.

He added that the carbon emissions of Seychelles were very low and cleaned up by mangroves and seagrass meadows. Ramkalawan said it makes the country a “zero contributor to the destruction of the planet”.

“And yet, our islands are disappearing and our coasts are being destroyed.”