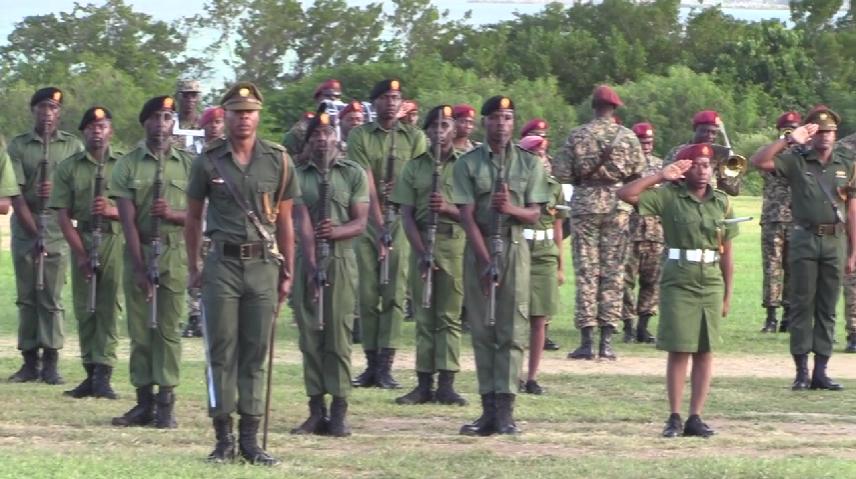 Thirty-three of the forty-one people who began the Antigua Barbuda Defence Force’s Basic Course 22-02 have successfully completed training and are now full-fledged soldiers.

Three recruits were dismissed for failure to meet the course’s standards while the other five were released for medical reasons.

The soldiers were also required to complete training in Law of Armed Conflict, conflict resolution and anger management.

Chief of Defence Staff, Colonel Telbert, gave the charge to the new soldiers as they begin their career.

“You are now fully indoctrinated members of the Antigua Barbuda Defence Force. You are no longer an ordinary citizen. As a member of this force, you are now, and will going forward, be judged by higher standards and by greater expectations.”

2nd Lieutenant Anthony Jacobs, the course officer, provided an overview of the training programme during the new soldiers’ rite of passage.

“The aim of the course is to instill the ABDF core values which are courage, integrity, loyalty, discipline and teamwork and standard military training into civilians of various backgrounds.

The top performer in Basic Course 22-02 was Private Lyndon Arthur who was also recognised for the Best Physical.

Private Arthur shared the lessons he will take with him from training as he begins his military career.

“There were many lessons taught, many experiences gained, and strong bonds forged among the batch of recruits.

“The training, in my view, has helped us to become stronger, more confident, more focused, and more disciplined.