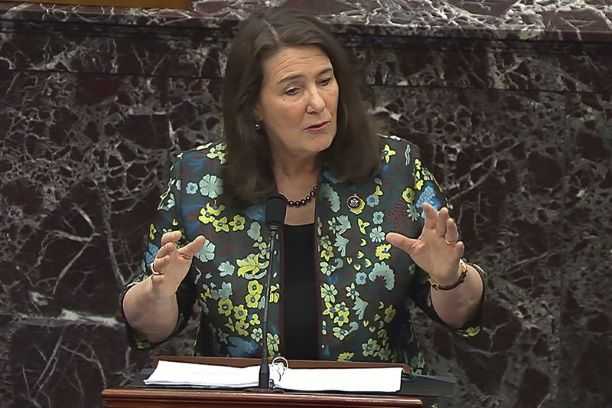 The Democratic prosecutors described in stark, personal terms the horror faced that January day, including in the very Senate chamber where Trump’s trial is underway. They displayed the many public and explicit instructions Trump gave his supporters—long before the White House rally that unleashed the Capitol attack as Congress was certifying Biden’s victory. Five people died in the chaos and its aftermath, a domestic attack unparalleled in U.S. history.

In videos, some posted to social media by rioters themselves, invaders talked about how they were doing it all for Trump.

“If we pretend this didn’t happen, or worse, if we let it go unanswered, who’s to say it won’t happen again?” argued prosecutor Rep. Joe Neguse, D-Colo.

Trump’s defence will take the floor on Friday, and the proceedings could finish with a vote this weekend.

The Democrats, with little hope of conviction by two-thirds of the evenly divided Senate, are making their most graphic case to the American public, while Trump’s lawyers and the Republicans are focused on legal rather than emotional or historic questions, hoping to get it all behind as quickly as possible.

This second impeachment trial, on the charge of incitement of insurrection, has echoes of last year’s impeachment and acquittal over the Ukraine matter, as prosecutors warn senators that Trump has shown no bounds and will do it again, posing a danger to the civic order unless he is convicted and banned from future office. Even out of the White House, the former president holds influence over large swaths of voters.

The prosecutors on Thursday drew a direct line from his repeated comments condoning and even celebrating violence—praising “both sides” after the 2017 outbreak at the white supremacist rally in Charlottesville, Virginia — and urging his rally crowd last month to go to the Capitol and fight for his presidency. He spread false claims about election fraud, even there has been no evidence of it, and urged his supporters to “stop the steal” of the presidency.

Prosecutors used the rioters’ own videos from that day to pin responsibility on Trump. “We were invited here,” said one. “Trump sent us,” said another. “He’ll be happy. We’re fighting for Trump.”

“They truly believed that the whole intrusion was at the president’s orders,” said Rep. Diana DeGette of Colorado. “The president told them to be there.”

At the White House, President Joe Biden said he believed “some minds may be changed” after senators saw chilling security video Wednesday of the deadly insurrection at the Capitol, including of rioters searching menacingly for House Speaker Nancy Pelosi and Vice President Mike Pence.