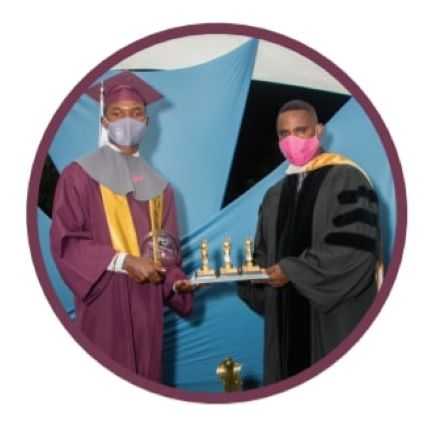 Valedictorian – Deshawn Forbes epitome of student discipline. Academically, a science enthusiast- career goal: a scientist. He was a permanent member of the school’s Principal’s List and an annual contender for student of the year.

Principal Awardees – The Principal Award is presented to students who best demonstrates the rounded vision of the Princess Margaret School. Recipients  must have produced outstanding academic work while at the same time model the qualities of diligence, honesty and a willingness to serve. Involvement in extracurricular activities is an asset. In essence each recipient must reflect the school’s motto “The World is in Need of Good Men and Women”.

Deron Samuel is a musical enthusiast and prodigy in his own right. He copped the coveted title of student of the year for a record three consecutive years.  His contribution to Princess Margaret School in addition to his academic prowess is his captaincy of the PMS Serenaders.

Throughout his student career at PMS, Deron remained talented and gifted with a plethora of possibilities for success. A model student in deportment, academic achievement, school spirit and service.

Angela Reid commenced her PMS journey as a quiet, unassuming, sometimes shy student. Over time, her love for the performing arts unfolded and blossomed through the school’s inter-house talent competition.

His confidence and leadership bloomed as she volunteered regularly to lead in general assembly and as a vocalist in the band.

Nailah Matthew modelled a distinguished brand of intelligence, leadership, student responsibility, discipline, school spirit, service and allegiance. She won the coveted title of fourth form student of the year. She served as Head Girl in her final year. She was an annual reader at the school’s anniversary church service, chairperson, and actress in the school’s independence program.

Throughout her school life she accomplished all and gave her all – always with a sense of dignity.