PM: We must solve this crime! 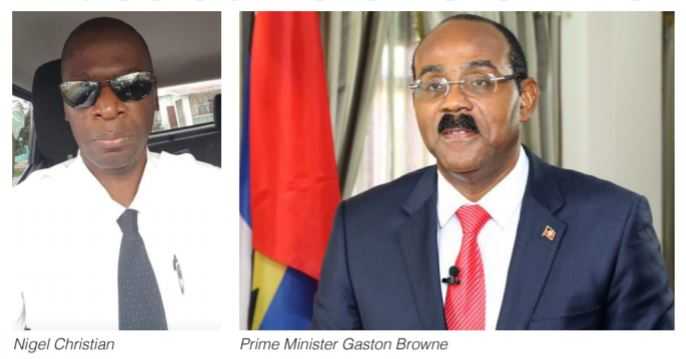 Prime Minister Gaston Browne is giving the family of customs officer, Nigel
Christian, 44, who was allegedly murdered on Friday night, the assurance that the
government will leave no stone unturned in its efforts to bring the perpetrators of
this crime to justice.
During Saturday’s special sitting of the House of Representatives, PM Browne paused to offer condolences to Christian’s family on behalf of the government and the people of Antigua and Barbuda.

“The killing of this out-standing customs officer has left the entire customs department in shock. We are also aware that an attempt was made on the life of an-other officer, Cornell Benja-min, some months ago. We are not sure if they are relat-ed, but they are of sufficient concern for the government and people of Antigua and Barbuda,” Browne empha-sized.

The prime minister then issued a call to the entire nation to ‘come together’ to solve this heinous crime.

“We have to solve this one! The government will go all out to solve this one as all public servants are at risk when criminals can feel so emboldened that they can violate the sanctity of an individual’s home, kidnap him and then murder him,” he warned.

Highlighting the fact that this type of criminal behavior is new to the country, Browne declared that there will be no hiding place for perpetrators of this type of
crime.
“We will not run from criminals; criminals must run from us! We have the police, ONDCP, the Defense Force at our disposal, however, we must solve this one together,” he proclaimed. PM Browne further announced that the government will post a reward of
$50,000.00 for information leading to the arrest of anyone connected to this crime.
Meanwhile, the police have begun investigations into the circumstances surrounding the Christian’s death. According to preliminary information disclosed by the police, Christian was allegedly abducted from his home in McKinnons at around 5:30pm on Friday
10th July by four men. His body was later found along a dirt road at Thibou’s in the
vicinity of New Winthorpes Area, with what appeared to be multiple gunshot wounds
to his upper body. A medical doctor arrived on the scene and pronounced Christian
dead at 9:17pm.
Both the Police and Customs have since issued appeals for persons who have information that can further assist their investigations into this latest homicide to contact the Criminal Investigations Department at 462-3913 or 462-3914.