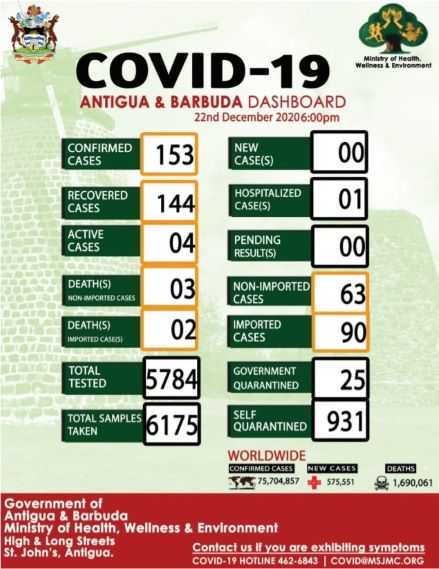 Antigua and Barbuda is not likely to impose a travel ban on visitors arriving from the United Kingdom despite the decision of several Caribbean territories to do so over fears concerning a mutated strain of the COVID-19 virus that was discovered in the United Kingdom in September.

The Ministry of Health is holding a press conference later today in which the country’s official position on the matter will be made known. Although health officials remain tight-lipped on the issue ahead of the press conference however, reliable sources informed PointeXpress that Antigua and Barbuda will not close its borders to visitors from the United Kingdom.

One source said the country will focus its energy on ‘managing the risk’ associated with the virus as it has been doing since the start of the pandemic and the reopening of its borders on June 1.

A second source noted that after several European countries announced they would close their borders to the UK, the European Commission issued a directive for these borders to reopen.

The source said Antigua and Barbuda will take a more guarded approach and will monitor the situation in the UK closely for a while longer.

UK Prime Minister Boris Johnson announced that a new variant of the COVID-19 virus was found in the UK that is over seventy percent more infectious than the strain of the virus that started the pandemic.

Johnson announced tighter restrictions in the UK, especially in the south of the country.

Grenada and Jamaica were the first English speaking Caribbean territories to announce restrictions against UK travelers.

There are fears that the new strain of the virus could move beyond the UK which has seen a spike in infections in recent months.

Scientists believe that the approved vaccines will be equally effective against the new strain of the virus as it is against the original virus. While the mutated virus is said to spread faster, nothing presently suggests that it is more deadly.

Meanwhile, the Ministry of Health has received no new COVID-19 positive reports from the Mount St. John’s Medical Center (MSJMC) or the Caribbean Public Health Agency (CARPHA) as of Monday 21st December 2020.

One new recovered case has been recorded bringing that total to one hundred and forty-four.

Consequently, the total number of persons with laboratory confirmed COVID-19 cases in Antigua and Barbuda remains at one hundred and fifty-three (153) which is inclusive of four (4) active cases.

The dashboard has been updated to reflect the changes to the government’s quarantine and self-quarantine columns of the dashboard.