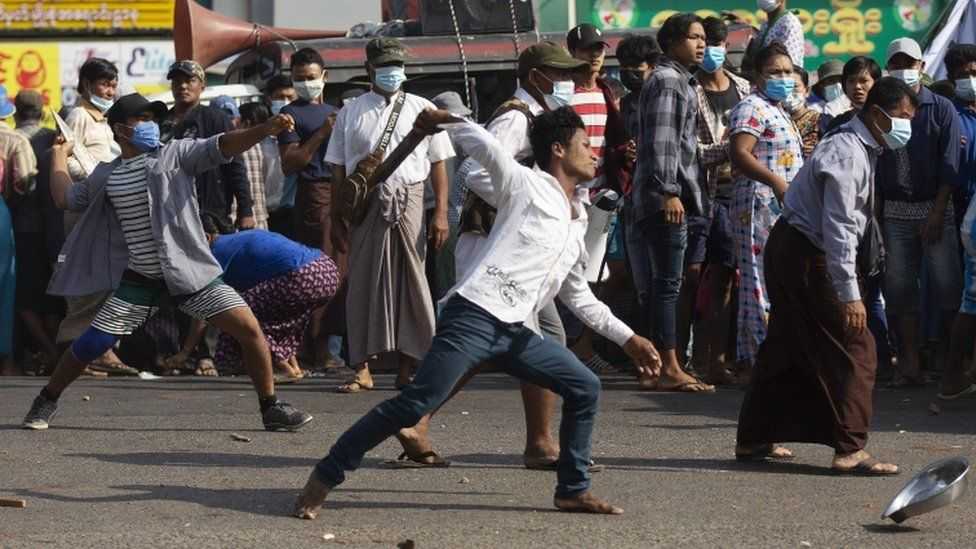 Supporters of Myanmar’s military have tussled with anti-coup protesters, as turmoil over the ousting of the country’s elected government spills onto the streets. Myanmar has been jolted by unrest since the military seized power in a coup on 1st February.

Since then, mass protests have been seen across the country, with many calling for a return to democracy. More anti-coup protests took place in the main city of Yangon on Thursday. But before coup opponents had a chance to gather in large numbers, about one thousand supporters of the military turned up for a rally in the city centre.

By Thursday afternoon, the rally had descended into violence, as scuffles between military supporters and opponents in parts of the city escalated. Some of the military supporters involved in the violence were armed with knives, clubs, pipes and catapults used to hurl rocks, witnesses said. In one incident, several men, one wielding a large knife, attacked a man outside a city-centre hotel, according to Reuters news agency. It said the man’s condition was not known.

At least three protesters and one policeman have been killed in violence at rallies against the coup. The coup saw military leaders overthrow the elected government of civilian leader Aung San Suu Kyi.

She has been placed under house arrest and charged with possessing illegal walkie-talkies and violating the country’s Natural Disaster Law. The military justified its seizure of power by alleging widespread fraud in November elections, which Ms. Suu Kyi’s party had won convincingly. Protesters are demanding an end to the military’s rule and want Ms. Suu Kyi released, along with senior members of her National League for Democracy (NLD) party.

The coup has been widely condemned outside Myanmar, prompting sanctions against the military and other punitive moves. In the latest rebuke, social media giant Facebook banned Myanmar’s military and its affiliates from its platforms on Thursday, citing deadly violence against protesters. The company said it acted after deciding “the risks of allowing the Tatmadaw [Myanmar military] on Facebook and Instagram are too great.”

Since the military seized power, it has arrested protesters, ordered internet blackouts and also banned social media platforms – including Facebook. Protests against the coup have continued despite a thinly veiled threat earlier this week by a military-linked broadcaster, which suggested it would use lethal force against demonstrators.