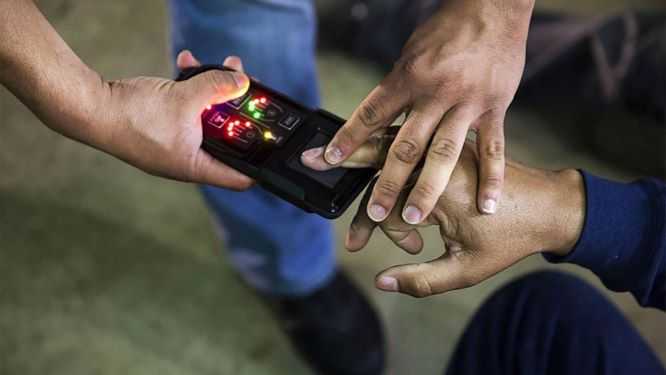 Mobile fingerprinting a core tool in US deportations – report

Boston, US, (AP) – A mobile fingerprinting app US immigration agents use to run remote ID checks in the field has become a core tool in President Donald Trump’s deportation crackdown, a pair of immigration rights groups say in a new report based on a Freedom of Information Act lawsuit.

The 2,500 pages of documents obtained through the 2017 lawsuit show that the app, known as EDDIE, has helped Immigration and Customs Enforcement agents ramp up deportations of migrants not intentionally targeted for removal, the report states. Such people are often detained as “collaterals” picked up in operations aimed at others, the activists say in Monday’s report. They say that field use of the app exacerbates racial profiling in immigrant communities.

For instance, an internal agency newsletter released with the documents described immigration agents using the app during traffic stops in collaboration with local police in Escondido, California, in 2017. That report credited the operation with “333 illegal alien arrests” in a 12-month period, although it provided scant additional context.

Used routinely by US immigration and border agents, mobile fingerprinting figures in a biometric data collection scheme the Trump administration is seeking to broadly expand in its final weeks. A regulation proposed by the Department of Homeland Security on September 11 would formalise the collection of face, iris and palm prints of non-citizens, as well as their DNA, in addition to the fingerprint data now collected.

“EDDIE is a way to bypass oversight and accountability,” said Paromita Shah of the nonprofit Just Futures Law, which produced the report with the immigrant rights group Mijente. “It allows agents to do the booking, to do the interrogations out of sight, out of the public’s view,” she said. “And in those places, abuse is most likely to occur.”

ICE spokesman Mike Alvarez rejected those allegations. He said field use of the mobile app, which is paired with Bluetooth-enabled fingerprint readers, does not replace detention booking at a local office. “There is no way to know” whether its use increases collateral arrests, he said, because the agency doesn’t collect such data.

The app allows field agents to remotely check fingerprints they collect against those registered in DHS and FBI databases. Courts have questioned federal databases’ reliability when used as the sole basis for detention decisions.