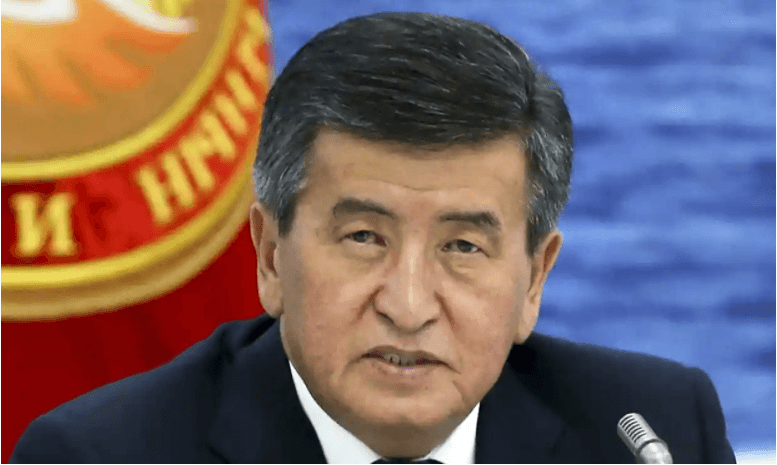 (Reuters) Kyrgyz President Sooronbai Jeenbekov resigned on Thursday, leaving power in the hands of a nationalist rival whose supporters freed him from jail last week. The swift transition appears to put an end to more than a week of turmoil and unrest that followed a disputed election. Sadyr Japarov, 51, who was named prime minister this week, told cheering supporters that he had taken on the powers of the presidency, following the resignation of Jeenbekov and of the parliament speaker, who would otherwise have been next in line.

“Today, (speaker Kanatbek) Isayev signed a resignation letter. All presidential powers have fully passed to me today,” Japarov said. Hours earlier, Jeenbekov became the third president of the small Central Asian nation since 2005 to be toppled in a popular uprising. In a statement, he said he was resigning to prevent violence, which he said would have been inevitable if protesters carried out a threat to march on his compound. “I do not want to go down in Kyrgyzstan’s history as a president who shed blood and shot at his own citizens.” Kyrgyzstan’s constitution requires a new election for president within three months.

The rules appear to bar Japarov, as interim president, from standing again. Kyrgyzstan has been in turmoil since an Oct. 4 parliamentary vote, which the opposition rejected after Jeenbekov’s allies were declared the winners. Since the election, opposition supporters have taken to the streets and seized government buildings, prompting the authorities to annul the vote. Japarov who was serving a sentence for attempting to kidnap another politician during unrest in 2013, was sprung from prison by his supporters last week.

A judge then threw out his conviction, and parliamentary factions picked him to be premier. Jeenbekov announced last week that he planned to resign, but later said he would stay in office until a new election was held. Japarov rejected the delay and pressed him to resign immediately. “The president couldn’t hold out. He’s very weak. No spirit,” Dastan Bekeshev, a lawmaker who supports neither Jeenbekov nor Japarov, told Reuters. “It’s not clear what happens next, nobody can tell what is going to happen.” Kyrgyzstan hosts both a Russian military base and a large Canadian-owned gold mine. Moscow, which considers the former Soviet space its sphere of influence, had said it would be responsible for ensuring stability.

Russia said Foreign Minister Sergei Lavrov had spoken by phone to his Kyrgyz counterpart, Ruslan Kazakbayev, and promised to assist “legitimate authorities” to stabilise the situation. Lavrov’s call could be seen as recognition of the legitimacy of Japarov, who named Kazakbayev to the post this week. Felix Kulov, a former prime minister who met with Jeenbekov before his resignation, said on Facebook the president had said nothing about planning to quit. “One thing is clear: some forces – I am sure sooner or later we will find out which ones – decided to seize power by force and made the president choose between resignation or an all-out war,” Kulov said.

Europe, US reel as virus infections surge at record pace