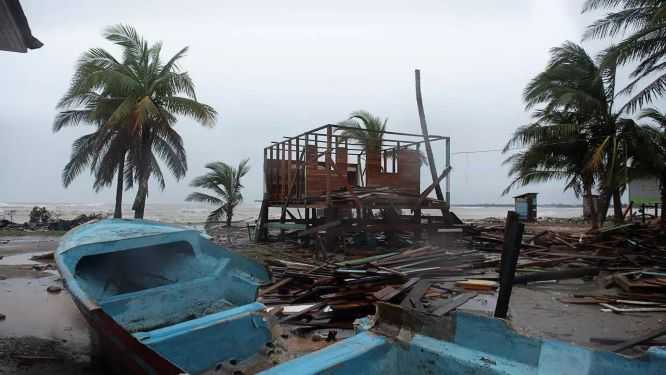 Iota made landfall as a category four storm near the town of Puerto Cabezas, where patients had to be evacuated from a makeshift hospital after its roof was ripped off. Residents are in shelters, and there are fears of food shortages.

The storm has weakened and Honduras was expected to have been hit late on Tuesday.

Iota struck Nicaragua on Monday evening with sustained winds of nearly 155mph (250km/h), the NHC said. It strengthened at sea to a category five storm but it weakened as it made landfall.

In Puerto Cabezas, also known as Bilwi, the storm damaged wooden homes, flooded streets and cut off electricity. Residents said the wind ripped away the roofs of houses “like they were made of cardboard”.

There were no immediate reports of casualties. Nicaraguan officials said around 40,000 people had been evacuated from areas in the storm’s path.

“[Iota] is the strongest hurricane that has touched Nicaraguan soil since records began,” said Marcio Baca, director of the Nicaraguan Institute of Earth Studies.

The hurricane is forecast to move inland across the country before hitting southern Honduras. The effect of the rains could be particularly devastating in areas already drenched by Hurricane Eta. Iota made landfall just 15 miles (24km) south of where Eta hit on 3 November.