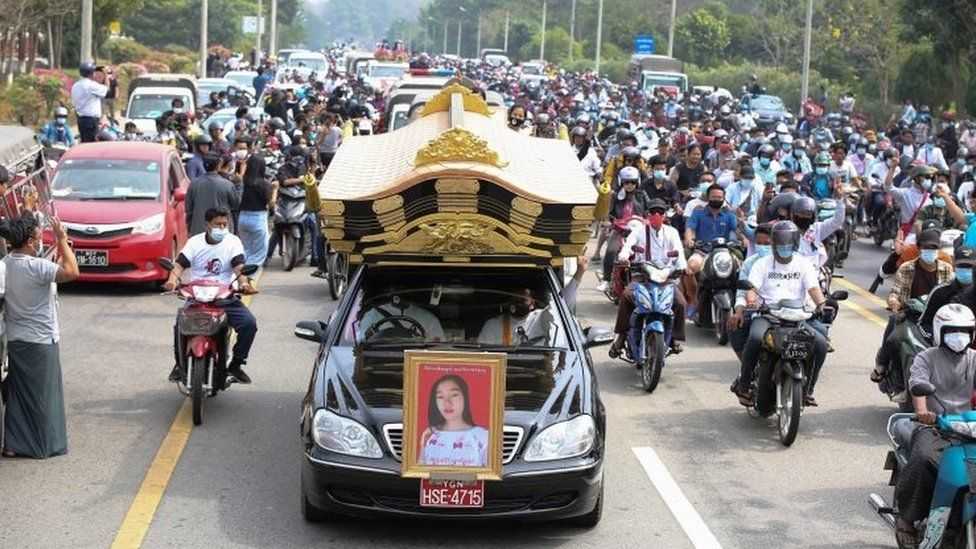 Huge crowds have turned out in Myanmar’s capital Nay Pyi Taw for the funeral of a young woman killed in protests against a military coup. Mya Thwe Thwe Khaing was shot in the head just before her twentieth birthday, the first of at least three people to die in the protests. Thousands lined the streets to honour her, some making the three-fingered salutes used by demonstrators.

The military overthrew the elected government earlier this month. Promises to hold early elections have failed to satisfy protesters, who are also seeking the release of the elected leader Aung San Suu Kyi and other members of her National League for Democracy (NLD) party. The military alleges the NLD’s landslide election win last year was fraudulent but has not provided proof.

Mya Thwe Thwe Khaing, a supermarket worker, was injured when police tried to disperse protesters earlier this month. She was kept on life support for ten days but died on Friday. She has become a focal point for demonstrators, with her image often displayed by people resisting the coup. Her coffin was driven through the streets in a black and gold hearse, accompanied by hundreds of motorbikes.

Protesters took to the streets across the country again on Sunday, despite the previous day seeing the worst violence yet in weeks of protests. Two protesters were shot dead when police used live ammunition to disperse crowds. The deaths brought widespread condemnation, with UN Secretary General Antonio Guterres saying: “The use of lethal force, intimidation and harassment against peaceful demonstrators is unacceptable.”

Also on Sunday, the wife of prominent actor Lu Min said he had been arrested after posting a video denouncing the military leadership.

The two-week-old civil disobedience movement in Myanmar now has its martyrs – represented in posters, paintings and cartoons at rallies which have continued to take place across the country. Their deaths will inflame public anger against the military government, but remind people too of the cost of resisting it. The plan now is to escalate the daily protests into a nationwide general strike, starting next week. This must damage an economy which is already suffering from the COVID pandemic – but its effect on the generals who seized power is harder to predict.