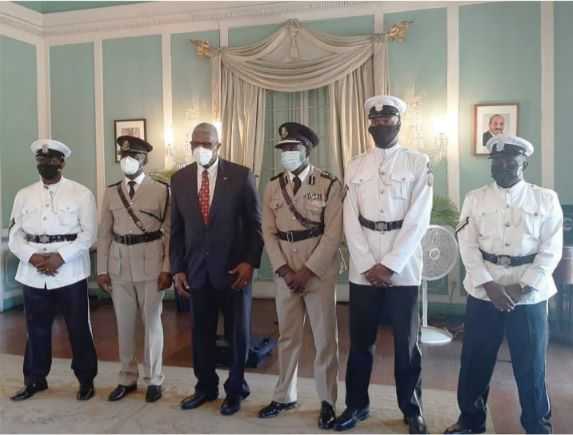 Four Royal Police Force of Antigua and Barbuda officers who participated in relief efforts in the Bahamas after the passage of Hurricane Dorian in 2019 have been honoured by His Excellency the Governor General, Sir Rodney Williams.

In a statement the police force’s communication division, STRATCOM, said the officers departed Antigua on September 20, 2019 to assist Bahamian authorities with security and humanitarian relief efforts following the devastation caused by the category 5 hurricane Dorian on September 1, 2019.

“The mission was in keeping with the commitment of the Caribbean Disaster Emergency Management Agency (CDEMA), and the Regional Security System (RSS) to regional safety, in the aftermath of natural disasters. The initial operation was slated to last for three weeks in the first instance; however, the officers were requested to continue for another three weeks,” the statement noted.

Commissioner of Police, Atlee Rodney was present at the ceremony and used the opportunity to thank the officers for their commitment and dedication to duty.

The Director of the National Office of Disaster Services, Philmore Mullin. and other senior police officers and the families of the awardees were also in attendance.

No bonus for port workers