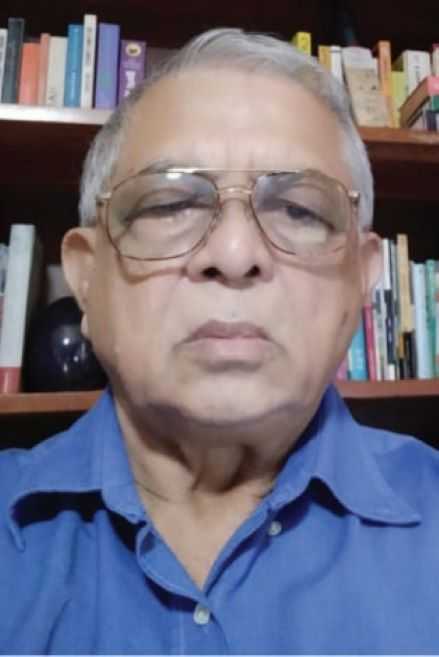 By Tony Deyal
On Wednesday morning, January 20th, 2021, I watched the last hurrah and goodbye to Donald Trump who, in hat terms, was not just a bad hat with a bee constantly in his bonnet, but a mad hatter always talking through his hat. His successor, Joe Biden, is someone I take my hat off to. He threw his hat in the Presidential ring for a third time. He and his team put on their thinking caps and went to the electorate, caps in hand, and made sure that Donald Trump is now old hat. He has become last year’s model and, I sincerely hope for America’s sake, that he will be thrown and lost forever, either in jail like the insurrectionists he egged on, or in the dustbin of world- and hat-history. If he ever becomes President again, I will eat my hat, a Christmas gift from my daughter. Last year she gave me one that would have been perfect for participating in the annual “World Tightest Hat” contest. However, after many trials and much thought, I realised I could not pull it off. This year, the hat I got for Christmas was like the Mel Blanc song about the one the little Mexican boy received. It was “too beeg.” Fortunately, I shivered from the breeze and not from falling three times in the river.

Psychiatrist, Carl Jung, created the concept of “synchronicity” to describe a meaningful coincidence of two or more events which have no causal relationship with one another and the probability of chance is not involved. I found it the best word to describe the ending of the Trump term of office and the celebration, last Friday, January 15, 2021, of “World Hat Day.” In fact, the similarity reminded me of the man who bought a new hat with a built-in fan that kept his head cool during the hot weather. He boasted, “It really blows my mind.” It also illustrates a comment made in a British Court more than a hundred years ago by Judge Lord Bowen who, in a case on equity, said something that I believe is an apt description of Trump and his cohorts, “I am reminded of a blind man in a dark room looking for a black hat- which isn’t there.”

Hopefully, Trump will be like Vidia Naipaul’s character “Hat” in Miguel Street who was a bad hat in his own way and who was last seen by Naipaul in Venezuela. Instead of deciding to go to Mar-a-Lago (meaning “sea to lake”), Trump should head out to Cape Hatteras, the “Graveyard of the Atlantic” and the deadliest trap in the world for sailors. It is responsible for more than 600 shipwrecks and, like The Donald, is unpredictable. One more shipwreck will not be too difficult for the Cape to handle.

It is like me and hats regardless of what names they’re given – caps, berets, birettas, bonnets and even “bowlers”. I love them all including the one called a “billycock”. I have often wondered which of the two sayings about hats it is associated with- “Never hang your hat where your hand can’t reach” or “If the cap fits, pull the string.” Hopefully, it is not a “G” major or minor. In the old travelling days, wherever I was, I always had a nightcap with whoever I was with because I liked the idea of having a port in every sweetheart but now, stuck in one place because of Covid, even though I realise that home is where your hat is, I cook my curry and use a Turban. I suppose I got the love of hats from my father who was never seen in public without his English-made “Wilson Hat” or, when he worked as an overseer in the cane fields, a “Cork Hat” also known as a “Pith Helmet”. Whenever he saw me wearing it, he took the pith out of me. I loved my Muslim Uncle’s “Kupi” or short, brimless cap which is also called a “Topi” in some parts of Africa and India. When I was about ten, the cap of choice for younger boys was the “Bepop”, named after the first modern Jazz music (which later became “Bop”). It was really popular in Trinidad in the late 1940s and was my headgear of choice and my nickname. A few of my friends from those days still call me “Bebop”.
Later, the crime writer, Lawrence Block, in his award winning Matthew Scudder stories introduced me to a new application of the word “hat”- essentially a US$20 payoff to a helpful police colleague. Block also had a hero named “Keller” who was a killer or hit-man, and whose most recent book was “Keller’s Fedora.” It reminded me of the time when I was watching a major international tennis tournament and saw one of the players wearing a hat. I think it was Roger Fedora. There are other related “hat” quips. In London, I saw an advertisement for “Hairpieces from £5.” I thought that it was a small price toupee. Then I met this Chinese-looking guy a few years ago and asked him what he did. He said he was a henchman for someone who wanted to take over the world. He boasted that he used a steel-rimmed bladed hat as part of his profession. I said to myself, “That’s an Odd Job.”
Join PointeXpress Newspaper Group
Then I was asked, “What do you call a dinosaur that wears a cowboy hat and boots?” Tyrannosaurus Tex. I know that some of you will not really understand some of these hat jokes because they go right over your head like the one that the British writer, futurist and sociologist, H.G. Wells, wrote about in a letter to the Mayor of Cambridge in 1938, “My dear Mayor. I stole your hat. I like your hat. I shall keep your hat. Whenever I look inside it, I shall think of you and your excellent sherry, and of the town of Cambridge. I take off your hat to you.”

My favourite hat story, and the one that caps it all, is about the boy who was really upset and, in tears, complained to his mother, “All the kids in school make fun of me. They say I have a big head.” His very solicitous Mom comforted him by saying, “Don’t worry with them. They’ re just a waste of time and envy your beautiful head full of hair and brains.” Then she told him, “Now stop crying. I want you to go to the store and buy a pound of rice and two pounds of potatoes for me. I have to cook dinner.” The boy asked, “Mom. Where’s the shopping bag? You know Neal and Massy now charges you for even plastic ones.” His mother replied, “What happen to you? You know we don’t have any. Use your hat!”

*Tony Deyal was last seen asking, “What did the hat say to the tie?” You hang around, I’ll go on a head.”