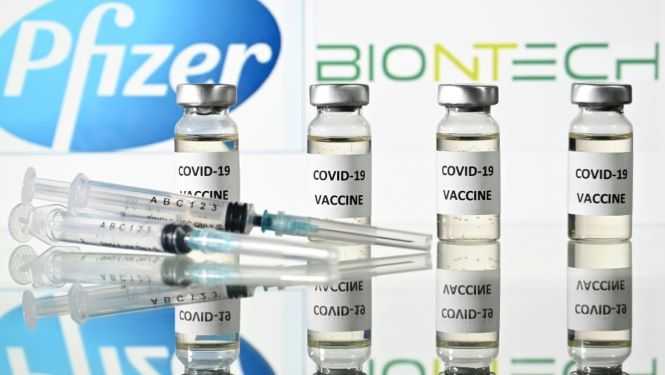 BERLIN (AP) — European regulators may approve a coronavirus vaccine developed by drugmakers Pfizer and BioNTech within four weeks, the EU’s drug agency said Tuesday, a time frame that could mean the shot is rolled out first in the United States and Britain.

The European Medicines Agency plans to convene a meeting by December 29 to decide if there is enough safety and efficacy data about the vaccine for it to be approved, the regulator said. The agency also said it could decide as early as January 12 whether to approve a rival vaccine shot by Moderna Inc.

German pharmaceutical company BioNTech and its U.S. partner Pfizer said earlier Tuesday that they had asked the European regulator for expedited approval of their vaccine. The companies have said that clinical trials showed the vaccine is 95% effective.

Multiple successful vaccines will be needed to end the pandemic, which has been on the upswing in Europe and the U.S. and so far left more than 1.4 million people worldwide dead. Pfizer and BioNTech have already sought approval to begin vaccinations in the U.S. in December. Rival Moderna said Monday it was asking U.S. and European regulators to allow the use of its vaccine.

British regulators also are assessing the Pfizer shot and another from AstraZeneca. There are several other vaccines in development, including in Russia and China.

Even after vaccines are approved, manufacturers and regulators will be monitoring how well they are received by patients to determine the frequency of rarer side effects that may only appear when millions are immunized. While the vaccines so far submitted for approval seem to prevent people from getting sick, it is still unclear whether they prevent people from picking up the virus entirely — and crucially — passing it to others.

Officials caution while some people may receive a vaccine in the coming weeks, it will take many months to give billions of people around the world the shot, or two if a booster is necessary, meaning that people will be living with virus control measures well into next year.

If its vaccine is approved, BioNTech said its use in Europe could begin before the end of 2020 — tough but not impossible if approval comes December 29. The regulator has also left open the possibility that the date of that meeting will be moved up if data comes in faster.

The December 29 date would be later than some European countries had hoped for. Germany, which has given BioNTech 375 million euros ($450,000) in funding to develop the vaccine, has been preparing to start immunizing people from mid-December onward.

Since requests have already been made to U.S. and U.K. regulators, approval might come from them first — and authorities the world over are promising to work with drugmakers to roll out the first shots within days, if not hours, of approval.

“We have known since the beginning of this journey that patients are waiting, and we stand ready to ship COVID-19 vaccine doses as soon as potential authorizations will allow us,” Pfizer’s chief executive Albert Bourla said in a statement.

BioNTech said it stands ready to ship stockpiles of vaccines where they are needed when the Amsterdam-based European agency or the U.S. Food and Drug Administration approve the vaccine.

“Depending on how the authorities decide we can start delivering within a few hours,” said BioNTech’s chief operating officer, Sierk Poetting.

The European Union’s top official said Tuesday around 2 billion doses of potential COVID-19 vaccines have been secured for the bloc’s 27 nations, with the first deliveries likely to start before the end of the year.