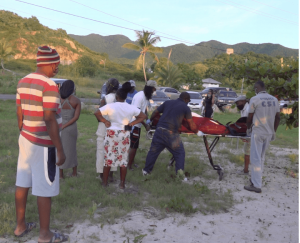 A recently retired taxi driver is dead after drowning at Ffryes Beach on Sunday afternoon according to police. Ernest ‘Fish’ Davis of Radio Range, a taxi driver attached to the Sandals resort for many years, retired in June for health reasons. Police spokesman, Inspector Frankie Thomas, issued a statement which stated that police are investigating an apparent drowning incident at Ffryes Beach. The police report said Davis was 85 years old.

Thomas said the police received a report of the incident sometime around 3:50pm Sunday 11th October. Investigations into the incident are ongoing.

A family in despair