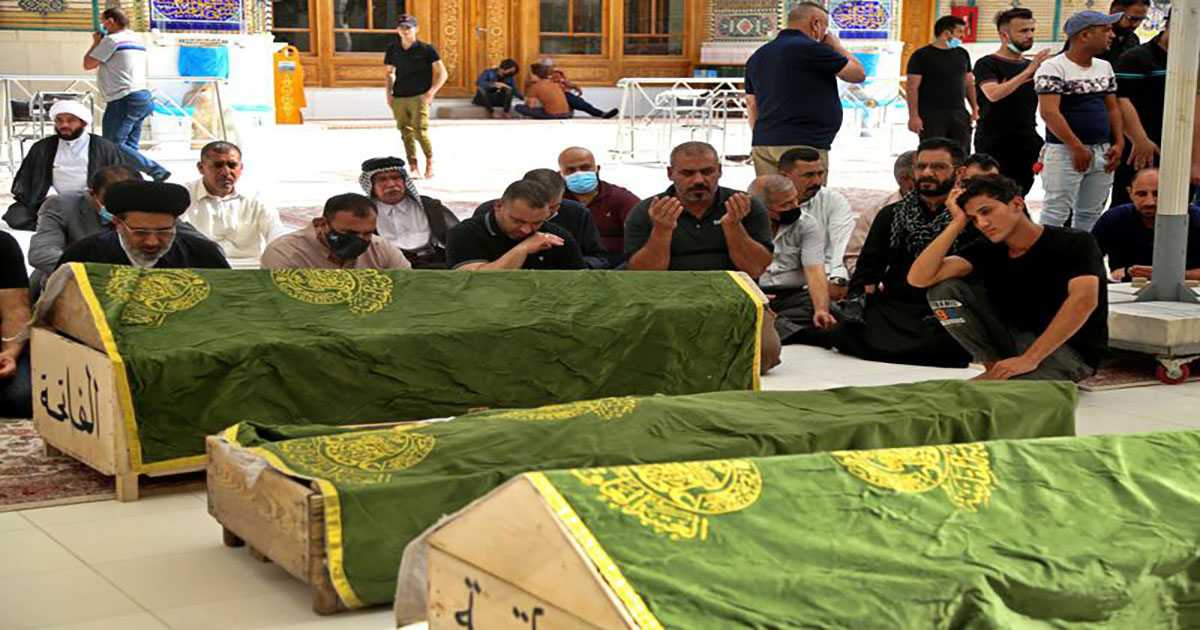 BAGHDAD (AP) — The death toll from a massive fire at a Baghdad hospital for coronavirus patients rose to at least eighty-two Sunday as anxious families searched for missing relatives and the government suspended key health officials for alleged negligence.

The flames, described by one witness as “volcanoes of fire,” swept through the intensive care unit of the Ibn al-Khatib Hospital, which tends exclusively to COVID-19 patients with severe symptoms. Officials said the blaze, which also injured one hundred and ten people, was set off by an exploding oxygen cylinder.

“I could not have imagined it would be a massive blaze like that,” he said. The flames overwhelmed the hospital’s second floor isolation hall within three to four minutes of the oxygen cylinder exploding, he said. “Volcanoes of fire.”

Most of those killed suffered severe burns, he said. Others were overcome by smoke, unwilling to leave behind relatives hooked up to ventilators. Ahmed said the patients could not be moved. “They would have minutes to live without oxygen.”

He said he and others watched helplessly as one patient struggled to breathe amid the smoke.

Widespread negligence on the part of health officials is to blame for the fire, Iraq’s prime minister, Mustafa al-Kadhimi, said Sunday. Following a special cabinet meeting to discuss the blaze, the government suspended key officials, including the health minister and the governor of Baghdad province. Other officials, including the hospital director, were dismissed from their posts.

It took firefighters and civil defence teams until early Sunday to put out the flames.

Among the dead were at least twenty-eight patients on ventilators, tweeted Ali al-Bayati, a spokesman of the country’s independent Human Rights Commission, a semi-official body.

Paramedics carried the bodies, many burned beyond recognition, to al-Zafaraniya Hospital, where Ahmed said forensics teams will attempt to identify them by matching DNA samples to relatives.

By midday Sunday, relatives were still searching anxiously for loved ones.

“Please, two of my relatives are missing. … I am going to die (without news about them),” posted a young woman on social media after a fruitless search for her family members. “I hope someone can help us find Sadi Abdul Kareem and Samir Abdul Kareem, they were in the ICU.”

Rokya Kareem, thirty, was looking frantically for her friend Riyam Rahman, a pharmacist, who was visiting her mother at the hospital. Rahman’s mother, Basima, was admitted to the hospital forty-five days ago with complications from COVID-19.

“All we know is they were in the room next to where the fire started,” she said. “Her phone is switched off, and her family has gone to every hospital trying to find them.”