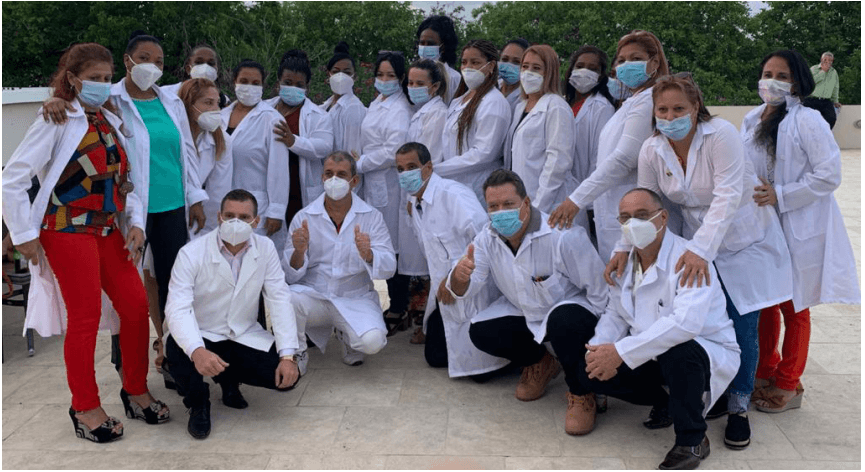 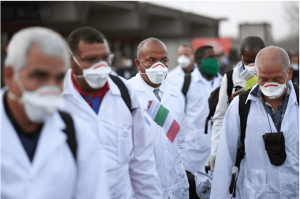 Cuba has launched a robust defense of its  medical brigades who are helping to strengthen the medical services offered in many Latin
American and Caribbean countries.

The Cuban doctors, nurses and other health specialists form the backbone of Cuba’s assistance to many countries in the region, however, the recent successes of the medical teams and their willingness to work alongside local medical teams in countries as far away as Europe and Africa to fight the COVID-19 virus have also attracted the renewed attention and scrutiny of the U.S government.

Cuba’s Ambassador to Antigua and Barbuda, Maria Fiffe Cabreja, told PointeXpress that American politicians such as Senator Marco Rubio of Florida have launched a campaign
to brand the Cuban medical assistance programme as a form of slavery. She strongly rejects this description of the brigade and its work. Currently, in Antigua and Barbuda, there are two teams of medical specialists; one has been on the ground in Antigua and Barbuda for several years while the other are members of the Henry Reeve International
Medical Brigade.

Ambassador Cabreja continued that the Henry Reeve Brigade specializes in disaster situations and serious pathogen outbreaks, such as the global coronavirus pandemic.
Its mission is to provide humanitarian and medical assistance to the population
of countries hit by natural disasters and epidemics and to contribute to their recovery.
The first deployment of the medical brigade was to New Orleans in the United
States following the Hurricane Katrina disaster in 2005.

She described the basic principles of the brigades’ work as the defense and the exercise of the human right to health, which entails free-of-charge universal access to health and universal health coverage for people and communities, without distinction of race, religion,
political ideology or economic and social status.

The Cuban government representative disclosed that currently there are seventy-three Cuban medical specialists working in Antigua and Barbuda, including two doctors and two nurses based in Codrington. Of that total, thirteen are members of the Henry Reeve Brigade while the other sixty are members of the brigade who were stationed here previously. They form an integral part of the health care services at the Mount St John’s Medical Centre where they offer a range of services including dental care. Members of the Henry Reeve Brigade arrived in St. John’s in late March and, after two weeks in quarantine, joined the medical team dealing with COVID-19 cases.

“Our medical brigades contribute to Antigua and Barbuda’s development as we contribute to development to other countries in the region. The assistance offered by our health brigades are critical to our neighbours and further afield. Now the US is threatening countries that utilize the services of the brigades. I am happy that Prime Minister Gaston Browne is on record stating his opposition to this policy,” she remarked. She said the new US policy has sinister intent. “It’s another attempt by the US to bring further hardship to the Cuban people but also it is aimed at dismantling the health sector of countries of the region.”

In addition to the work of the Cuban medical brigades, many of the doctors working at MSJMC, as well as several in private practice, were trained on scholarships offered by the Cuban government.