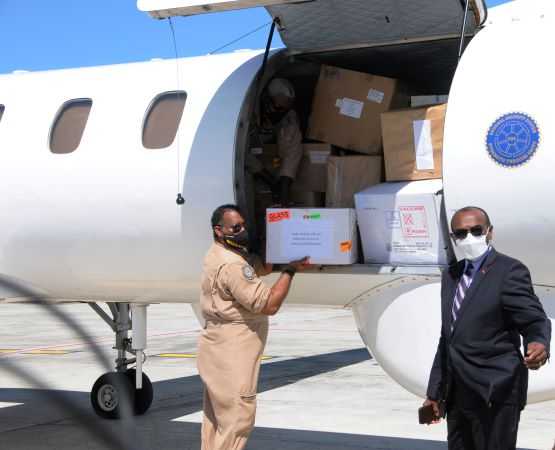 Minister of Health Sir Molwyn Joseph was airside at V.C. Bird International Airport on Thursday to accept 5,000 doses of the Oxford-AstraZeneca vaccine, a gift from the Commonwealth of Dominica.

The vaccines arrived in Antigua on a Regional Security System aircraft, less than twenty-four hours after the announcement was made during a post-Cabinet press briefing on Wednesday.

With this first batch of Oxford-AstraZeneca, healthcare workers will be given priority.

“For the past several months we have been fighting the transmission of the disease and now we have to take the additional step of inoculating our population. This is an important step because it gives us now the capacity to take care of our frontline workers. I want to say publicly, throughout my experience over the past several months, the frontline workers have done an outstanding job and they deserve to be the priority at this time,” Sir Molwyn declared.

The vaccine doses will be stored at a secure facility operated by the Medical Benefits Scheme, until the distribution programme begins. According to the minister, when the 40,000 doses arrive from India next week, these will be stored at a new facility being erected at the former Air Force base. This will be the permanent facility for vaccines storage, according to Sir Molwyn.

The health minister noted that a plan has been carefully crafted that will guide the inoculation programme nationwide.

The government is predicting it will have in its possession at least 85,000 doses of the Oxford-AstraZeneca vaccine within the next two weeks.

A standing ovation for India!