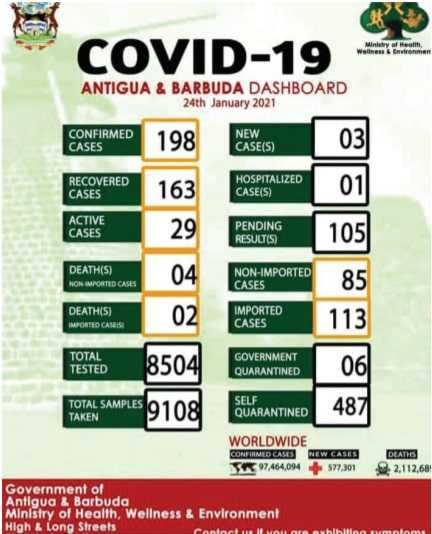 The Ministry of Health reports that information from the Mount St. John’s Medical Center (MSJMC) has revealed three new laboratory confirmed COVID-19 cases in Antigua and Barbuda as of Saturday 23rd January 2021.

Subsequent to the publication of the dashboard for Friday 22nd January 2021 with the cut off time of 6:00 p.m., two hundred and twenty-four additional samples were processed by MSJMC, increasing the pending results from one hundred and fifteen to three hundred and thirty-nine.

Meanwhile, one new recovery has been recorded, bringing that total to one hundred and sixty-three.

Consequently, the total number of persons with laboratory confirmed COVID-19 cases in Antigua and Barbuda is one hundred and ninety-eight (198); which is inclusive of twenty-nine (29) active cases.

Meanwhile, one hundred and five samples are pending.